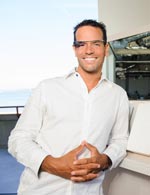 At Williams College, Ned concentrated in biology and neuroscience. He earned a masters at MIT in the Brain and Cognitive Sciences Department. Ned completed his Ph.D. at Harvard in cognitive neuroscience, where he was awarded the Richard J. Herrnstein Prize for the year’s best Ph.D. dissertation. He continued his research as a post-doctoral fellow at University of California San Diego and the Salk Institute. His research has been published in Science and Nature Neuroscience.

As a cognitive neuroscientist, Ned’s particular research focus is about how the brain acts to enable humans to acquire and use language. His research benefits from a methodology that brings high-resolution brain cell recording techniques to human studies. It probes the brain’s own internal language, as Ned describes it.

Eager to begin applying findings and progress to affect lives, Ned focused on autism, a developmental condition that includes language impairment when he launched his firm. Brain Power develops software tools, apps that run on Google Glass. The tools record neural, physiological, and behavioral data;process them; and give intuitive, simple, feedback to the wearer, caregiver, or physician. The glass can be worn by a child or the caregiver or both, and can work in conjunction with smart phone or watch devices. Ned’s work has been covered by numerous print and online publications about technology, science and economics, and he has been a presenter at conferences worldwide.