Negin Farsad Is This Year’s Speaker for Religious Understanding 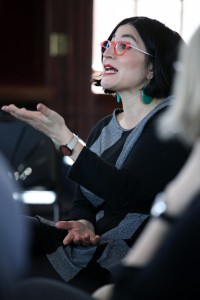 Mixing punchy rhetoric and timely topics of conversation, comedian Negin Farsad showed students how she uses humor to explore ethnic, racial and religious stereotypes. An Iranian-American Muslim who grew up in Palm Springs, California, and whose teachers couldn’t pronounce her name, Ms. Farsad weaves personal stories with quick-witted humor to highlight the absurdity of stereotypes—why it’s important to reexamine iconic terms and images that perpetuate them.

Even with difficult topics such as Israel and Palestine, Ms. Farsad says, “We shouldn’t skirt around these issues and not talk about them. Don’t be afraid; it’s important to get into the issue.”

Ms. Farsad was named one of 50 Funniest Women by Huffington Post, named one of the 10 Best Feminist Comedians by Paper Magazine, and was selected as a TEDFellow for her work in social justice comedy. She is the author of the recently released book, How To Make White People Laugh. Ms. Farsad is host of “Fake the Nation,” a political comedy podcast and she’s a regular panelist on NPR’s “Wait Wait…Don’t Tell Me!” She appears on the current season of National Geographic’s “Year Million,” the upcoming season of HBO’s “High Maintenance,” and the last season of Netflix’s “Chelsea Handler Show.” She is also the director/writer/star of the rom-com “3rd Street Blackout”. She has written for/appeared on Comedy Central, MTV, PBS, IFC, and Nickelodeon. She is director/producer of the feature film The Muslims Are Coming!, and she has written articles for The Guardian, The Daily Beast, and Oprah Magazine. Ms. Farsad also sued New York State’s MTA over the right to put up funny posters about Muslims—and won. She started her comedy career as a Cornell and Columbia-educated policy advisor for the City of New York.