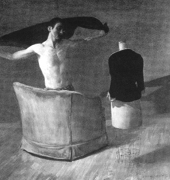 The Nesto Gallery will present the figurative paintings of Boston-based artist Damon Lehrer on Friday, April 4. The exhibit will run through April 24, 2003.

While Damon’s work has been compared to that of Lucian Freud and Paul Cadmus, Damon developed his own style through an assimilation of art history and a keen observation of nature. The show’s centerpiece is an 18–foot-long operatic tableau Reunion. Against a mountainous backdrop young men and women pose in an ambiguously secular and contemporary Deposition scene. Also included in this exhibition is a grouping of Mr. Lehrer’s newest works culled from his Dark Vignette series. With these dense paintings Damon departs from the narrative as he weaves his figures into knots of interacting forms.

Mr. Lehrer received his master of fine arts degree at Boston University in 1994. His paintings and prints are included in many private and public collections including the Boston Public Library, the Fogg Art Museum and Houghton Library at Harvard University and the New York Public Library. Damon’s paintings were recently shown at one-person shows at the Moravian College in Bethlehem, Pennsylvania and at the Tatistcheff Gallery in New York City. He is currently represented by the Pepper Gallery in Boston.

The Nesto will host an opening reception on Friday, April 4, 2003 from 6:00 p.m. to 8:00 p.m.. The Nesto Gallery is located in the lower level of the Science Building on the campus of Milton Academy. Hours are weekdays from 8:30 to 3:30 and by appointment.