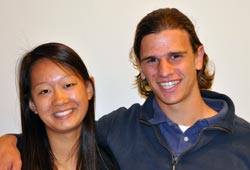 Newly elected head monitors Jessica Li (II) and Nick Maragos (II) have taken up the mantle as school leaders from outgoing head monitors Molly Gilmore (I) and Tom Schnoor (I). Jessica and Nick have moved into the office in the Schwarz Student Center, and they are already planning for the 2012–2013 school year.

“Overall, we want to set a positive and enthusiastic tone, especially through assemblies,” says Nick. “We want to pick up from Molly and Tom’s energy and start new traditions and School-wide events that everyone will remember.”

The head monitor election is an involved process. Over the course of a week in mid-April, each one of ten boys and three girls—self-nominated—made his or her case to all students and to the faculty about serving as one of the two head monitors for the 2012–2013 year. On April 11, ten male candidates delivered three-minute speeches to a packed house in the ACC. Students, Classes IV through I, could then rank the nominees online in order from one through ten. The three boys receiving the highest-ranking votes delivered longer, final speeches, with the three female candidates on April 17. Students voted that evening, until 11 p.m. Vote totals and election results were announced the following morning.

“The election process is much longer than most people realize, and it can be pretty nerve racking,” says Jessica. “There is a lot to do beforehand, such as answering questions for the student newspapers and filling out various forms. The benefit of that is the process makes you think about why you are running, what qualities you have, and what changes you would like to see.”

About her election, Jessica says, “People I have never talked to before have approached me, including teachers and staff members. Getting to know new people is great.

Being a member of Class I is a leadership position in and of itself, and it carries both influence and responsibility. Jessica and Nick say they are excited about leading their class and forging strong relationships among all classes, creating an inclusive environment.