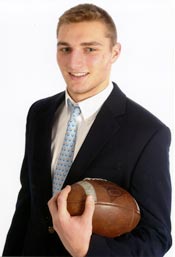 Nick’s head coach, Kevin Macdonald, nominated him for this honor. “Nick is a tremendous receiver. He has the most exceptional hands of any receiver I have coached in 36 years,” says Kevin. “Nick has made spectacular catches, often snagging the ball with one hand as he is falling out of bounds. His most noteworthy quality is his tremendous competitiveness and leadership ability. Nick never gives up, and his tenacity is likely why his peers have elected him a three-sport captain. He is also one of the most unselfish players I have coached. He is an exceptional leader and role model.”

In his senior year, Nick caught 37 passes for 558 yards while playing an eight-game ISL schedule. Being selected for the award involves a long application process and includes a review of the nominees’ academic records.

“Having had my name entered into the Hall of Fame is a thrill,” says Nick. “Coming at this time of year, the honor also made me reflect on my senior year and the football season. I feel very fortunate. I wouldn’t be getting this award without the support of our great team, my fellow teammates and, of course, Coach Mac. I have so much to thank them all for. This award certainly ends the year on a high note.”

Nick will attend Cornell University this fall, where he will study in the School of Industrial and Labor Relations and be a member of the Division I football team.