Nick Jacob (I), State Champion, Will Defend the Constitution to Win the National Title 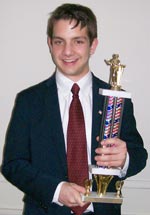 “It was a really interesting tournament,” said Nick. “In the American Legion competition, we’re not allowed to watch other competitors speak, so we have to sit in a ‘prep room’ until it is our turn to speak.”

When it came time for Nick to take the stage, he delivered his speech entitled The Constitution: An Enduring Document. “My speech focuses on how our constitution has contributed to American history,” said Nick. “It actually centers on a metaphor—the notion that our constitution is similar to the Washington Monument, in terms of construction, strength and simplicity. I’ve always been very passionate about the United States and American history. The American Legion contest has been a great opportunity for me to use that passion.”

Nick will represent the Bay State and Milton Academy at the national championship in Indianapolis, Indiana on April 10. He will deliver his speech again, and for this round he is also required to speak extemporaneously for three minutes on a portion of the Constitution chosen by the judges.

“Luckily, the four extemporaneous topics were released in January this year, so I have had some time to do research and prepare outlines for speeches,” said Nick. “For nationals, I’m working on writing and memorizing full speeches for all four topics; in the last two levels of competition I’ve spoken more extemporaneously, improvising from my research.”

Beyond earning a coveted and highly competitive title, Nick would win a college scholarship of $18,000 if he becomes the national champion.