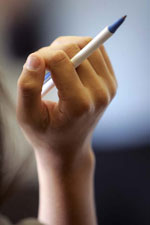 Continuing the long Milton tradition of excellence in writing, nine student poets received prestigious awards this spring. From institutions such as Princeton and Bennington, through Hollins University and Smith College, judges recognized Milton students’ talent with language and imagery. In creative writing classes, the students devoted hours to writing and workshopping their pieces before English faculty members encouraged them to submit their best work to award competitions and publications.

Students sift through and develop a number of ideas over time. For instance, Kat says, “My piece was originally a short story, but then it evolved into a poem that was driven by language.”

Elizabeth Bennett’s (I) poem “When We Fight” earned second place in the Bennington Young Writers Competition.

Jessica Blau’s (II) piece “Mermaids” was runner up in the Nancy Thorp Poetry Contest and will be published in Cargoes, the Hollins University student annual literary magazine. Another of Jessica’s poems titled “My Second Kill” and Malika Iyer’s (II) poem “Memory” both earned honorable mentions in the contest.

The Susquehanna Review, an annual national undergraduate journal run by students at Susquehanna University, will publish poems by Jessica, Emmie, and Nicole Acheampong (II). The issue will also feature short stories by Victoria and Tina Cho (I).

Osaremen Okolo’s (II) poem “Neighbor” and Cary Williams’s (I) poem “Unbraiding” will be published in The Marble Collection: Massachusetts High School Magazine of the Arts Spring 2012. The issue will also feature Cary’s fictional story, “To Trust a Spiderweb.”