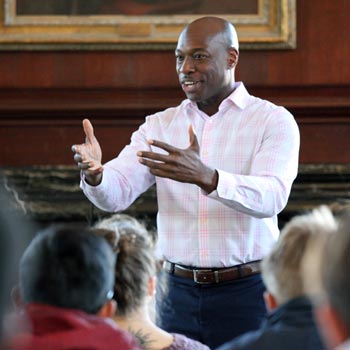 Mental health advocate and spoken-word artist Hakeem Rahim was a freshman at Harvard University in 1998 the first time he had a panic attack. By the end of his sophomore year, he was hospitalized in a psychiatric unit, where he received a diagnosis of bipolar disorder and began his journey toward wellness.

Mr. Rahim, this year’s Talbot Speaker, shared his story as part of a presentation to destigmatize mental illness, encourage students to reach out when they’re hurting, and to be supportive friends when someone they know needs help.

“Many people are suffering in silence, and it doesn’t have to be that way,” Mr. Rahim said. “It’s OK to talk about mental illness. There is no shame in seeking treatment, and a diagnosis is not the end.”

Mental illness is not contagious; it is not always related to substance abuse—although some people abuse drugs and alcohol to self-medicate—and it is not related to a person’s race, class, gender or sexual orientation, he said. Many people with mental illnesses lead very successful lives, he added, sharing images of celebrities like Demi Lovato and Kendrick Lamar, who have spoken publicly about their struggles with mental illness.

Mr. Rahim—who tours nationally and internationally speaking to college, high school and middle school students—had visions and heard voices during a manic episode during his sophomore year. His behavior started to alarm his close friends and roommate, who called Mr. Rahim’s parents. They picked him up from Harvard and eventually brought him to a psychiatric emergency room.

Mr. Rahim credits the roommate with taking action, and not attempting to “fix” the problem on his own. Using the analogy of a physical injury, Mr. Rahim noted that no one would ask just any friend to stitch up a bad cut; they would go to a medical doctor—and many mental illnesses need treatment from health professionals. Young people should not take on that role for their peers, and they can actually suffer when they feel responsible for their friends’ mental wellness.

Students should listen to their friends and lead them to help if they’re hurting, he said, noting that people with thoughts of suicide typically tell others about those thoughts before they act. The best peer help comes from letting friends know that they are heard and supported while they seek treatment.

“You don’t have to have a cape to be a superhero,” Mr. Rahim said. “You can save someone’s life just by being there. Your role is to help that person get help, but take care of yourself in the process.”

Sadness, nervousness and distress are ordinary parts of life, and not necessarily indicators of mental illness, he said. People should be conscious of their emotions and seek help if a particular negative emotion lasts longer than two weeks or significantly impacts their life.

Mr. Rahim returned to Harvard after about a year, and his friends made sure he felt supported and well as he sought counseling. He graduated with a psychology degree and later received a dual master’s degree from Columbia University’s Teacher’s College. In 2012, Mr. Rahim began openly sharing his journey with mental illness. He has testified in front of the House of Representatives and Senate, and has shared his journey with over 60,000 students. In 2016, he launched the I Am Acceptance College Tour Campaign. He is a TEDx speaker and a member of the Depression and Bipolar Support Alliance’s national board. Mr. Rahim is the President and CEO of I Am Acceptance, Inc, a nonprofit committed to building a platform around the values of community, wellness, and acceptance. He is also the founder and CEO of Live Breathe, LLC.