Not a Word of English: One Summer in China 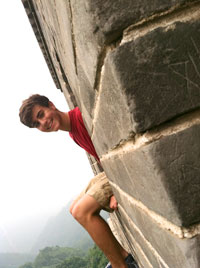 Colby Parsons (II) was fully immersed in Mandarin this summer, during his four weeks in China. He did visit all the major sites—the Great Wall, Forbidden City and the terracotta warriors in Xian—but Colby’s favorite moments were weaving his way through the night markets in the cities where his host families lived.

“The crowded market streets with filled with people and I didn’t hear one word of English. It was the best way to practice my Chinese and the locals were very surprised to hear me speak!”

Colby went to China as part of Startalk, a National Security Language Initiative (NSLI) program funded by the U.S. State Department. The program aims to increase the number of Americans learning, speaking, and teaching critical need foreign languages such as Chinese and Arabic. Colby was selected and awarded a scholarship to travel with 11 other students. In addition to touring in Beijing and Xian, the students each stayed with a host family in two cities—Harbin and Qiqihar, located in the far northeast corner of the country.

“My host families were so welcoming and friendly,” says Colby. “Each family had a host brother or sister. They spoke very little English, so at times there was lots of hand gesturing. But we made some really solid connections and friendships. What surprised me was observing how similar parents are with children, no matter where you are in the world!”

Colby will continue studying Chinese this year at Milton and reach a new level of fluency before his next trip.