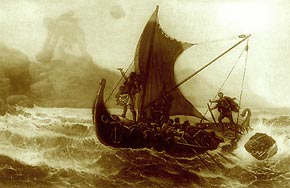 Milton theater productions are never what you might assume they would be. This weekend’s production of The Odyssey, directed by performing arts faculty member Shane Fuller, turns Homer’s epic poem into a welcoming evening of storytelling. The goal is, as Shane puts it, to create “more than a show; the goal is to create a theatrical experience for the audience.”

Homer’s ancient work chronicles the hero Odysseus’s ten-year voyage home after the fall of Troy. Though a complex work, Shane saw in it the opportunity for something unique. “I was interested in doing a work with which we could be creative and explore,” Shane says, “which would allow us to devise the show ourselves, to create our own adaptation. This show will focus on how perspectives change as a story is told over time. We’re taking an age-old tale and finding out what happens when we tell the story in modern day.”

From dialogue and characters to costume and lighting, this performance will generate an intimate vibe, involving the audience in what’s going on. No tech tricks or fancy set, no elaborate make-up or hidden crew members. “We’re making everything visible,” Shane explains. “The stage manager and tech booth will be on the stage; some of the lines will be narrated straight from the text; we’re going to have a live camera on stage with projection screens to project some of the play in real time.”

The cast consists of 12 students, which means that everyone plays multiple parts, and will even narrate at various points. Every scene will be portrayed as a story being told, so the characters will move in and out; there will be very little costume change; the set will be minimal, consisting of a few pieces of furniture, pillows and some rope. The production will rely heavily on lighting rather than on material props. Shane and his students don’t want anything to come between them and the audience.

To complete the intimate feel of the production, the show will be staged on the thrust in King Theatre, so that the audience will be seated on three sides. Cozy enough? Not yet. Rather than having rows of chairs in the area closest to the stage, audience members will lounge on cushions, pillows and beanbag chairs. “With the audience almost part of the set, and the actors intermingled throughout,” Shane says, “we’re hoping to make this production a really comfortable, shared experience.”