“Nothing in fiction writing is an accident.” Around the Harkness Table, Probing Roth’s Novel 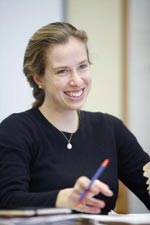 Class I students in Nicole Colson’s English elective, Woman, Man and Their Fictions, have finished reading Philip Roth’s Pulitzer Prize-winning novel American Pastoral. On a Tuesday morning, they settle in around the Harkness table in Nicole’s classroom, dog-eared copies of the paperback in hand, as their teacher greets them and briefly shares some information about an upcoming assignment and mid-semester grades. Housekeeping agenda items out of the way, Nicole asks of no one in particular, “We can go anywhere in the book now, so where would you like to start?”

Pages start to turn, and students chime in:
“We didn’t talk about the dinner party yet.”
“Yeah, I think we should talk about the conversation they had at the table.”
“And Lou’s rant—that was important.”

Nicole turns to page 344 and reads an excerpt. Once the scene is set, she encourages, “Now talk to me about that opening discussion.”

For clarification, one student asks, “Who was McGovern?”
A classmate responds, “George McGovern. He ran against Nixon for the presidency and lost.”

“Yes, and why is this interesting? Dig a little deeper,” Nicole prods.
“Because until then, pornography was not an appropriate topic for dinner conversation.”
“Right. And all of a sudden, it’s in the same conversation as politics—the characters are treating them as equal topics.”
“I like the line ‘It’s not the same out there anymore, in case you haven’t heard.’ The conversation that they’re having at the dinner party is a microcosm of what’s happening culturally, in the larger world.”
“I agree. Things that were once private are becoming public.”

“What was so shocking about Watergate?” Nicole asks.
“It marked the fall of people’s trust in the government.”
“People’s approval of the presidency plummeted after Nixon. And the mistrust people had about the war in Vietnam only added to it.”

Nicole nods her head. “Exactly. The idea that your president would lie to you was shocking back then. Nowadays, it’s practically assumed. This wasn’t just a major turning point in politics—this was a turning point in American culture. Tell me about this exchange: ‘Then why do you let it into your lives?’ ‘It leaks in,’ Bill says to him. ‘Whatever is out there leaks in.’”
“Bill has a condescending tone, here. It’s like he’s accusing the Swede of living in a bubble.”
“The Swede was living this perfect life, but then his daughter sets off that bomb and runs away, his marriage falls apart, and his life starts crumbling at the same time the ideal of the American dream is crumbling.”

“If we see the Swede as reflecting the American dream, or the American conscious,” Nicole says, “it makes sense that Roth constructed his character’s downfall to mirror the crumbling of, or the major shift in, American culture, yes? So if there is a new American dream, what is it? Use the text.”
“The new American dream is whatever brings you to the top.”
“Including being a porn star.”
“Aha,” Nicole nods. “Tell me more.”
“So many celebrities today are famous for nothing. They start as socialites, but they become famous when there are sex tapes of them released.”
“Since politics isn’t the way to become untouchably famous anymore, people turn to becoming reality television stars, willing to do anything.”

Nicole prompts, “In the text, one of the characters suggests that Linda Lovelace has eaten from the tree of knowledge. Talk to me about that.”
“It’s a Biblical reference, which is ironic since they’re talking about a pornographic film.”
“But that ties in with what we’re saying about these new celebrities—they’re becoming very rich from doing pretty disgusting things.”
“It’s as if this new consciousness is the new reality, but does that mean the former reality was less real?”
“Like the Swede’s life—was his life ‘real’ before everything started to fall apart? Or was it only real once he realized all the lies that were his life’s foundation?”
“It’s pretty confusing—you don’t know what to believe.”

“Tell me,” Nicole asks, “where all of our information is coming from here. Who is ‘telling us’ the facts of this whole story?”
“Oh, it’s all coming from Zuckerman’s imagination!”
“Correct! It’s all fiction,” Nicole reminds her students. “Whom can you trust here?” she asks.
“No one, really. You don’t know who to trust, because everything you read is filtered through Zuckerman’s account, or his imagination.”

“Why does this book make the reader, make us, so uncomfortable?” Nicole asks.
“It hits pretty close to home.”
“This is a realistic account of what could have happened during this time. It’s not too far-fetched.”
“And the whole story addresses a shift in our culture, in our world. The historical events mentioned here affected our lives today.”
“Roth also makes sure you’re uncomfortable. He doesn’t let you off the hook. He really hammers it home.”

“For next time,” Nicole concludes, “I want you to think about the slogan they choose for the ad: A bull upon which a herd can be built. Nothing in fiction writing is an accident.”