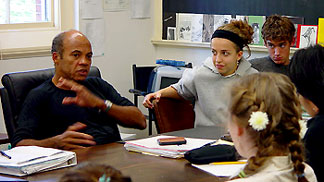 The Bingham Lecture brought novelist, scholar and professor, John Edgar Wideman to Milton as artist-in-residence this week. Mr. Wideman addressed students in assembly and worked with them in classrooms, and at Common Ground, the student group working on cultivating the diverse School community. John Wideman, the only writer awarded the PEN/Faulkner Award for Fiction twice—once in 1984 for his novelSent for You Yesterday and again in 1990 for Philadelphia Fire— is widely regarded for his intricate literary style in novels about the experiences of black men in contemporary urban America. He is probably best known for Brothers and Keepers (1985), the story of his relationship with a brother serving life in prison for murder.

Mr. Wideman is a professor of English at the University of Massachusetts, Amherst. His articles on Malcolm X, Spike Lee, Denzel Washington, Michael Jordan, Emmett Till, Thelonius Monk, and women’s professional basketball have appeared in The New Yorker, Vogue, Esquire, Emerge and the New York Tlmes Magazine.

In 1998, Mr. Wideman won the Rea Award for the short story. In 1990, he received the American Book Award for Fiction. He was awarded the Lannan Literary Fellowship for Fiction in 1991 and the MacArthur Award in 1993. Other honors include the St. Botolph Literary Award (1993), the DuSable Museum Prize for Nonfiction, the Longwood College Medal for Literary Excellence, and the National Magazine Editors’ Prize for Short Fiction (1987).

John Wideman lives in Amherst with his wife, Judy, a lawyer specializing in death penalty cases.