On Writing and Living: Naomi Shihab Nye is this Spring’s Bingham Reader 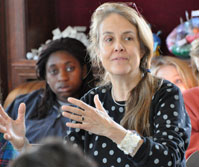 With ease, emotion and humor, award-winning poet Naomi Shihab Nye read a selection of poems—hers and others’—and spoke about the writing process to students in King Theatre on Wednesday. Ms. Nye is this spring’s Bingham Visiting Writer, and she dedicated her first poem, “Shoulders,” to the city of Boston and to former faculty member Bill Moore, who was in the audience.

“Sometimes our best poems—the ones that continue to talk to us—sneak up on us. They’re the ones that we weren’t looking for, that we weren’t anticipating,” says Ms. Nye. “People often ask, ‘What can you do when you are utterly blank?’ The two things I tell them are eavesdrop and babysit. If you listen to other people talk, you will hear interesting language that isn’t like your own. If you spend time with little children, you will be refreshed by the majesty of their inquisitive metaphorical wonder.”

Ms. Nye also talked about her practice of keeping a journal, in which she writes every day—recording fragments, observations, questions, single words. “Three to seven minutes is all you need,” she told students. “Three lines a day adds up to 90 lines in a month. That’s a lot of material. You will be amazed at the threads you find and the connections you make.”

Ms. Nye is author and editor of more than 30 volumes. Her longtime friend and editor is Virginia Duncan, Milton Class of 1980. Ms. Nye’s books of poetry include 19 Varieties of Gazelle: Poems of the Middle East, a finalist for the National Book Award; A Maze Me: Poems for Girls; Words Under the Words; and You & Yours, a bestselling poetry book of 2006. She has written several prize-winning poetry anthologies for young readers, as well. Ms. Nye has held several fellowships, including Guggenheim, Lannan, and Witter Bynner. She has received a Lavan Award from the Academy of American Poets, the Isabella Gardner Poetry Award, the Lee Bennett Hopkins Poetry Award, the Paterson Poetry Prize, and four Pushcart Prizes. She has sat on the Board of Chancellors of the Academy of American Poets and has won the Neustadt Prize for Children’s Literature.

Shoulders
A man crosses the street in rain,
stepping gently, looking two times north and south,
because his son is asleep on his shoulder.

No car must splash him.
No car drive too near to his shadow.

This man carries the world’s most sensitive cargo
but he’s not marked.
Nowhere does his jacket say FRAGILE,
HANDLE WITH CARE.

His ear fills up with breathing.
He hears the hum of a boy’s dream
deep inside him.

We’re not going to be able
to live in this world
if we’re not willing to do what he’s doing
with one another.

The road will only be wide.
The rain will never stop falling.