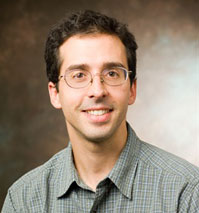 Groundbreaking research in neuroscience, specifically in the area of optogenetics, is changing scientists’ understanding of animal behavior. Ralph DiLeone, associate professor of psychiatry and neurobiology at the Yale School of Medicine, spoke to students about the history of neuroscience and recent cutting-edge discoveries during the science assembly in King Theatre.

Optogenetics uses both optic and genetic techniques to control the neuron activity in living tissue. Dr. DiLeone’s research focuses on reward-related behavior and on discovering which brain mechanisms regulate eating and are important in the development of obesity. Other scientists are applying the techniques to areas such as Alzheimer’s and substance addiction.

“New technology allows us to focus on the neurons themselves,” says Dr. DiLeone. “Just five or six years ago, it was a scientist’s dream to think we could control turning them on and off. And now, we can actually do it, using laser light technology.”

Dr. DiLeone showed a brief video of a laser at work in a mouse, controlling its brain neurons to signal that it was hungry. In his enthusiastic talk, Dr. DiLeone encouraged students to consider the field of neuroscience; this research is just the beginning of what is probably 20 to 30 years of exciting work in optogenetic science.

“Technology allows people to ask whole new questions,” says Dr. DiLeone. “We must have a progressive view of science. We can’t get too attached to the way we do things now, because our knowledge is constantly changing.”