Over the Summer, Students Dove Into Community and Social Justice Work 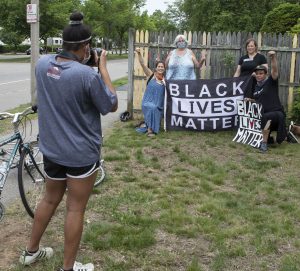 Although it was a summer unlike any other, many students found ways to do community and social justice work, both remotely and in person. Four students, all Community Engagement board leaders, participated in a virtual seven-week program run by the National Network of Schools in Partnership. Nina Kathiresan ’21, Kayla Mathieu ’21, Conner Hartman ’21, and Jaden Thompson ’23 worked on issues including homelessness, food insecurity with students from across the U.S, who were grouped into task forces. Hartman and Mathieu worked together on the same subcommittee called Demographics in Education.

“We produced the Rezoning Project, which aimed to inform, advocate, and share stories regarding the issues surrounding zoning inequality in public education,” said Hartman. “We were struck by the statistic that, on average, nonwhite districts received about $2,200 less per student than districts that were predominantly white, adding up to $23 billion less overall.”

Hartman said it was “extremely inspiring working with students from all over the country. Unlike Milton, a lot of the schools represented didn’t have community engagement programs. Hearing their experiences of inequality and powerful examples of civic engagement in communities hundreds of miles away from Milton really opened my eyes to the possibilities of what we can do with our program.”

Tapti Sen ’21 interned with the Muslim Justice League (MJL), a Boston-based group organizing and advocating for marginalized communities in the U.S. She was an MJL liaison to The Black Response Cambridge, a group working to defund the Cambridge Police Department. Her job included research, scheduling and attending meetings with other organizations in the area, and building a website.

“I definitely learned a lot about diplomacy while meeting with other organizations and about transformative and restorative justice practices as a part of the research I was doing,” said Sen. “My favorite part was the real-world experience I’ve gained. I’ve been thinking about pursuing civil rights advocacy as a career, and this internship gave me an insight into what my future could potentially look like.”

In June, photography teacher Scott Nobles invited his advanced photo students to join him in a collaborative portrait project over the summer. Thea Chung ’21, Lauren Walker ’21, and Maddie Weiler ’21 all took him up on the offer and Sebastian Park ’21 assisted with the technology.

“Our goal was to amplify people’s voices against racial injustice through art,” said Weiler. “We went to rallies in the Boston area and took portraits of protesters, totaling more than 200 participants. We asked the participants to fill in the prompt “I need ___ to breathe” with whatever felt most meaningful to them, and we layered those audios over their portraits.”

“In Photoshop, we put those photos in black and white, added a border, and overlaid the participants’ audio onto their portraits,” said Walker. “Finally, we posted those portraits to our Instagram so we could share our participants’ voices. My favorite part of the project was attending the protests and talking with and connecting with the participants that I photographed.”

Chung also said her favorite part of the project was the interactions with the participants. “I photographed a wide range of people who shared their frustration and pain with me. In general, the project allowed me to recover the humanity behind the statistics we see on the news. Though we are still finding ways to share the project with a broader audience, I think it has been very successful.”