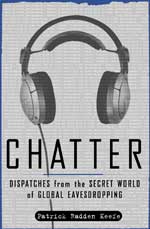 In recent months, the Los Angeles Times, the Boston Globe, Washington Post and NPR have been talking about Chatter by Patrick Radden Keefe ’94. Chatter (Random House, 2005) is Patrick’s debut non-fiction account of how, where and why Big Brother is watching terrorists, and citizens, of the world.

Patrick investigates what has been hushed up by politicians and overlooked by the American media; he also explores whether the government’s communication interception is effective for predicting and preventing future attacks and to what degree it threatens our privacy.

Kirkus Reviews, a gauge of the publishing world, writes, “Debut author and Yale Law student Keefe points to a pattern suddenly well known to those who listen in on what the rest of the world is saying: ‘Before September 11, before the Bali bombing in October 2002, before the suicide bombs in Riyadh in November 2003, there was a sudden spike in chatter, a crescendo of foreign voices. Then silence.’”

Patrick has been interviewed for NPR’s “Fresh Air” and published an op-ed piece in the New York Timesand an article in the Globe’s “Ideas” section. Don Aucoin of the Globe featured Patrick and his debut work on March 5, 2005.

“’There are big changes happening kind of under our noses right now,’” Patrick told the Globe. “’What I’m afraid of is we’ll wake up 15 years from now in a country we don’t recognize.’

“Nothing in Keefe’s manner suggests he is prone to overstatement,” writes the Globe. “When his subject matter grows overly technical, he illuminates it with a flash of humor. But a certain doggedness is also evident—a trait that came in handy while researching the book, because he was not exactly invited into the world he wanted to describe.

“In fact, he says, he was repeatedly stiff-armed in his efforts to get basic information from the National Security Agency, an agency so clandestine that an old joke holds that its initials stand for ‘No Such Agency.’ The NSA is the government organization in charge of surveillance; with a $6 billion budget and 60,000 employees around the world, Keefe says, it is larger than the FBI and CIA combined,” the Globe story continued.

According to David Kahn, author of The Codebreakers, “Chatter represents a timely and important contribution to the literature of eavesdropping and code breaking, and an extraordinary introduction to a world about which most Americans know very little.”

In the late 1990s, when Patrick was a graduate student in England, he heard stories about an eavesdropping network led by the United States that spanned the planet. The system, known as Echelon, allowed America and its allies to intercept the private phone calls and e-mails of civilians and governments around the world. Taking the mystery of Echelon as his point of departure, Patrick explores the nature and context of communications interception, drawing together strands of history, investigative reporting and riveting anecdotes. The result is part detective story, part travel-writing, part essay on paranoia and secrecy in a digital age.

Chatter begins at Menwith Hill, a secret eavesdropping station covered in mysterious, gargantuan golf balls, in England’s Yorkshire moors. From there, the narrative moves quickly to another American spy station hidden in the Australian outback; from the intelligence bureaucracy in Washington to the European Parliament in Brussels; from an abandoned National Security Agency base in the mountains of North Carolina to the remote Indian Ocean island of Diego Garcia.

As Patrick hunts down the truth of contemporary surveillance by intelligence agencies, he unearths reams of little-known information and introduces us to a rogue’s gallery of unforgettable characters. We meet a former British eavesdropper who now listens in on the United States Air Force for sport; an intelligence translator who risked prison to reveal an American operation to spy on the United Nations Security Council; a former member of the Senate committee on intelligence who says that oversight is so bad, a lot of senators only sit on the committee for the travel.

“It is absolutely thrilling to see someone a young, as competent, and as gifted as Patrick Radden Keefe taking on the secret world of Washington,” write investigative journalist Seymour Hersh.

Provocative, sometimes funny, and alarming without being alarmist, Chatter is a journey through a bizarre and shadowy world with vast implications for our security as well as our privacy. It is also an impressive nonfiction debut for Patrick.

Nationwide, Chatter is prompting a national conversation about privacy and how intelligence work affects everyone.