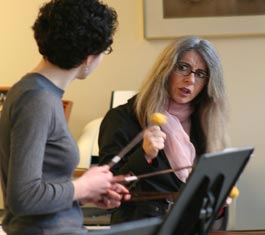 Throughout her career, Evelyn Glennie has commissioned 143 new works for solo percussion, composed and recorded music for film and television, and gives more than 100 performances a year worldwide. Her diverse collaborations have included performances with artists such as Nana Vasoncelos, Kodo, Bela Fleck, Bjork, Bobby McFerrin, Emmanuel Ax, Sting, Kings Singers, Mormon Tabernacle Choir and Fred Frith. Her first album, a recording of Bartok’s Sonata for two Pianos and Percussion, won a Grammy in 1988.

According to the Drummergirl.com Web site, “Much media attention has been given to the fact that Evelyn is a deaf musician. Evelyn is profoundly deaf, and she doesn’t feel the need to make a big deal about it. After she lost her hearing when she was young, Evelyn spent a lot of time with her percussion teacher, Ron Forbes, refining her ability to detect vibration. She can distinguish the rough pitch of notes by associating where on her body she feels the sound. Truth be told, Evelyn’s hearing is something that bothers other people far more than it bothers her.  Since she is one of the world’s top international musicians, it must not make much of a difference to the orchestras, conductors or venues.”

Former Milton faculty member Dr. Mitchell Gratwick, in memory of his wife, Katharine Perkins Gratwick ’24, established the Gratwick Performance Series as a gift to the School. Designed primarily to give students the rare opportunity to hear world-class artists, the event has continued as an unbroken tradition for 78 years.