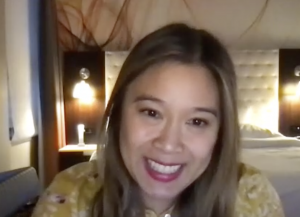 Some of Milton’s best student writers and artists gathered virtually on Monday evening for the Laurence S. Persky Memorial Awards. The annual awards are given for the best work appearing in Milton Academy student publications and honor excellence in creative writing, journalism, art, photography, and production.

Guest speaker and alumna Tina Nguyen ’07 spoke to students about writing and told stories about her “weird career path.” She is a national reporter for POLITICO, covering the Make America Great Again (MAGA) movement, disinformation, and internet culture. Prior to that, she was a staff reporter for Vanity Fair Hive for more than four years, covering American politics and the rise of Donald Trump.

Nugyen said she tries to make her “writing as compelling as possible.”

“Writing is the foundation—it’s an art but it’s also a discipline,” she said. “The goal is to make sure your audience gets what you are saying. They may not like what you have to say, but at least they understand it.”

The Persky Awards were established to honor the memory of a Milton student writer who passed away just prior to his Class I year more than 30 years ago. Head of School Todd Bland did the honor of announcing the individual awards.

Emily Franklin ’90, author of more than 20 books (including her new poetry collection, Tell Me How You Got Here) judged the creative writing in student publications this year. Emily received a Persky Award back in 1990. The creative writing honorees were:

In photography, Honorable Mentions to:

And Persky Awards to:

In drawing and painting, Honorable Mentions to:

And Persky Awards to:

In other media/digital art category, Persky Awards to:

A team of English, Science, and Communications faculty judged student journalism printed in publications across the campus this year.