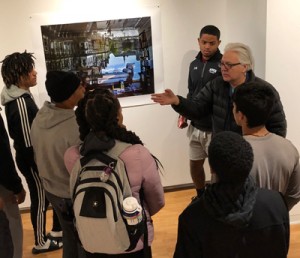 “I did not come here to give you a prescription. This is what happened in my life and career,” photographer Abelardo Morell told Milton visual arts students. “You will find your own way to do what you are meant to do.”

Mr. Morell visited Milton as a Melissa Dilworth Gold visiting artist. He spent several days on campus meeting with students and demonstrating his work and technique.

Born in Cuba, Mr. Morell’s family emigrated to New York City in 1962 following the Cuban Revolution. He recalls looking out the windows of his childhood home in Havana and seeing his surroundings as light-filled and beautiful, in contrast to the street-level view of his family’s basement apartment in New York. Just a young teenager, Mr. Morell had no idea that John Coltrane and Igor Stravinsky were making artistic history nearby in his new city, or about the works on display at the Museum of Modern Art. “It was dark, but I looked out the narrow window and observed Americans,” he said. “In some ways, it was a great opening to a new place.”

After receiving his first Brownie camera, photography became a new kind of window for Mr. Morell. He captured images of his family seeing their first snow, of his parents’ hard work maintaining the apartment building they lived in, and packages of food, which to his family symbolized American abundance. He received a scholarship to Bowdoin College, where his plans to become an engineer were derailed by failures in math and physics. Then he took a photography class.

“My English was pretty bad. I couldn’t write a decent sentence, but my pictures were pretty good,” said Mr. Morell. “In fact, they were paragraphs.”

Mr. Morell began using camera obscura—an optical technique that uses a small opening in a dark screen to project an inverted image opposite the opening—to photograph landscapes and cityscapes. At Milton, he demonstrated the use of a tent camera he invented to project images onto the ground, incorporating the texture of surfaces like dirt, stones and concrete into the pictures. The effect occurs naturally; Mr. Morell does not use Photoshop or editing software, which is “boring.” Instead, the angles of the periscope-like lens work to create a rich, layered image.

His wife, Lisa, remains Mr. Morell’s inspiration and first audience. His latest work is a compilation called Flowers For Lisa, a book of images he made for her birthday. The photos, some of which are styled after the work of artists he admires, play with space and color, often using floors and paper surfaces to display flowers in novel ways.

When photographers shift their perspectives, and shoot from below or above, they “make pictures like there is no gravity,” Mr. Morell said. “Art is mostly about the ordinary, about how we make it interesting.”

During Mr. Morell’s visit to campus, he spent time as a guest lecturer in photography classrooms and set up his tent camera in the student center. He also met with students in the Brother/Sister Bonding affinity group and worked with student-artists to create still life photos that will be displayed in Straus Library.

His Nesto Gallery exhibition, “I placed a jar in Tennessee,” will run from February 28 through April 26. The gallery is open to the public.