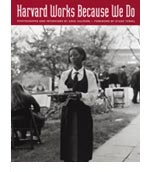 Photographer Greg Halpern, author of Harvard Works Because We Do spoke to students on Wednesday, December 8. His book of photographs grew out of his senior project, a photo essay of the people who work as Harvard’s cleaning people, cafeteria workers, custodians, grounds workers and security guards. The project became a four-year study of the University’s working poor. Halpern also helped form the Living Wage Campaign at Harvard, a three-year drive to win higher pay for Harvard’s labor force. Greg Halpern writes, ” They dust the portraits, polish the oak panels, and prune the trees. They cook the food and guard the campus; they work in every room of every building, day and night, and yet one of their frequent complaints is that the nation’s most perceptive students and scholars simply do not see them.” Greg’s visit to Milton was sponsored by the student group Common Ground.