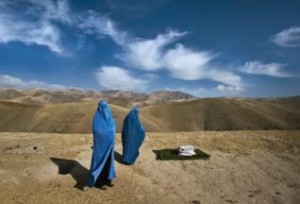 The work of world-renowned war photographer and author, Lynsey Addario, will be on display starting this Wednesday, October 28, in the Nesto Gallery. Lynsey Addario is an American photojournalist based in London, who photographs for the New York Times, National Geographic and Time magazine.

In the year 2000, Ms. Addario traveled to Afghanistan to document life and oppression under the Taliban. She has since covered conflicts in Afghanistan, Iraq, Lebanon, Darfur, Congo and Libya.

She has received numerous awards, including the MacArthur Genius Grant Fellowship. In 2009 she was part of the New York Times team that won a  Pulitzer Prize for the photographs of Talibanistan. She won the Overseas Press Club’s Award for Veiled Rebellion, documenting the plight of women in Afghanistan. In 2011 and 2012, she was named by Newsweek magazine as one of “150 Fearless Women.” In 2015, American Photo Magazine named her as one of five most influential photographers of the past 25 years, saying she changed the way we saw the world’s conflicts.

Ms. Addario’s recent work includes ongoing reportage on Syrian refugees for the New York Times, ISIS’ push into Iraq, the civil war in South Sudan, and African and Middle Eastern migrants arriving on the shores of Sicily. She was the official photographer of the Nobel Peace Center’s 2014 winners Malala Yousefzai and Kailash Satyarthi in Oslo, Norway in December 2014.

Ms. Addario is also the author of the recently published memoir titled It Is What I Do – A Photographer’s Life of Love and War. Her story will be developed into a movie to be directed by Steven Spielberg and starring Jennifer Lawrence. In her book she writes, “As a war correspondent and a mother, I’ve learned to live in peace and to witness war – to experience the worst in people but to remember the beauty.”

An opening for Lynsey’s exhibit, Veiled Rebellion, is scheduled for Wednesday, October 28, beginning at 5:30 p.m. The Nesto Gallery is located on the lower level of the Art and Media Center.