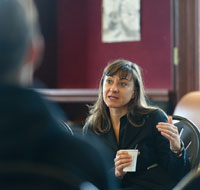 Award-winning photojournalist Lynsey Addario shared with students the challenges and rewards of her work covering conflicts and human rights issues, and the power of images in reporting. In 2000, Ms. Addario traveled to Afghanistan to document life and oppression under the Taliban. “I believe people have to see the ways in which other people live,” says Ms. Addario. “We come from a place of great privilege, but most people in the world don’t have anything. They have to fight for peace, for rights, for food.”

Ms. Addario makes photographs for the New York Times, National Geographic and Time magazine. She spoke about being raised in a supportive and “unconventional household” in which her parents encouraged her to pursue whatever made her happy. They instilled in her the optimism that she carries today, despite the hardship and atrocity she has witnessed.

“This work gives me incredible perspective,” says Ms. Addario. “Most of the women I photograph aren’t allowed to work, to speak their minds, or to choose whom to love. I know how lucky I am in my life, and that helps me stay positive.”

She has covered conflicts in Afghanistan, Iraq, Lebanon, Darfur, Congo and Libya. Her work routinely brings her to dangerous areas and dangerous circumstances. She often has to sneak into areas of conflict where journalists are unwelcome. In 2011, she was kidnapped and held captive in Libya with three other journalists for a week before they were freed.

The life of a war photojournalist can be “lonely, rigorous and competitive,” she told students. “You have to know what you want and what stories you want to tell. And you have to be determined. However, the importance of bearing witness—the power of being there and sharing what you’ve seen with the world—is incredible, fulfilling work.”

Ms. Addario won the Overseas Press Club’s Award for Veiled Rebellion, which documents the plight of women in Afghanistan. She was awarded the MacArthur “Genius Grant” Fellowship, and in 2009 she was part of the New York Times team that won a Pulitzer Prize for her photographs of “Talibanistan.” In 2015, American Photo magazine named her one of the five most influential photographers of the past 25 years, saying she changed the way we saw the world’s conflicts. Ms. Addario is also the author of the recently published memoir titled It Is What I Do—A Photographer’s Life of Love and War.

Ms. Addario was on campus as both this year’s Margo Johnson Lecturer and Melissa Dilworth Gold Visiting Artist. An exhibit of her work, Veiled Rebellion, will be on display in the Nesto Gallery until December 17.