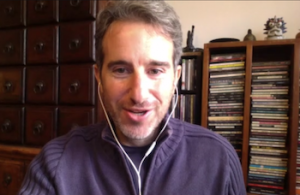 The difference between a good jazz musician and a great one comes down to one thing, award-winning jazz pianist Aaron Goldberg ’91 told students: “It’s the ability to play and listen at the same time at a really high level.

“It’s an experience you can only have by playing with other people,” he said during a webinar supported by the Melissa Dilworth Gold Visiting Artist fund. “The best jazz musicians can hear everything that’s going on around them and react and interact in the moment. The most important thing you can do to develop that skill is to play with your friends and concentrate more on what they’re doing than what you’re doing.”

Goldberg fell in love with jazz as a Milton freshman. As a classically trained pianist, he had never explored improvisation before he enrolled in Music Department faculty member Bob Sinicrope’s jazz class. The summer “reading” was an introductory cassette of jazz, which Goldberg listened to incessantly.

“I never imagined when I started at Milton Academy that I would become a professional musician,” Goldberg said. “As far as I was concerned, I was more interested in sports than music; playing piano was just one of the things I did. Mr. Sinicrope’s first-year jazz class changed my life.”

Learning to listen to jazz was like learning language as a baby, Goldberg said. “It was all that listening that actually turned me into a jazz musician without realizing I was becoming a jazz musician. By falling in love with jazz and listening to it over and over again, I was learning this new language by ear.”

After graduating from Milton, Goldberg spent a year studying music at the New School in New York City before entering Harvard, playing as many gigs as he could and going to shows by “aging but still very active jazz masters” like Joe Henderson, Freddie Hubbard, Art Blakey, and Betty Carter. After a few early tours with others, the saxophonist Joshua Redman heard Goldberg play and invited him to join his band in 1998—he has played with Redman ever since.

Following his talk, which he opened by playing the John Coltrane ballad “Lonnie’s Lament” live, Goldberg answered questions from students about developing his own style, improvising melodies, his path to becoming a professional musician, and why he still pushes himself. He recalled a tour with Redman in Japan, saying “I felt grateful. The tricky part was that I didn’t feel good enough,” he said. “I didn’t feel like I was even on the same level as the guys in my band. Of course, you discover later that everyone feels that way. Nobody feels good enough and that’s why everybody continues to work and get better.”

Goldberg has toured with artists like Wynton Marsalis, Kurt Rosenwinkel, Guillermo Klein and many others, and he has released several solo albums. He has also recorded four albums with the OAM Trio and appears on more than 100 albums as a sideman. In addition to charity efforts in places like Haiti and Angola, Goldberg is active in education and political engagement and is on the faculty at the New School.

The Melissa Dilworth Gold ’61 Visiting Artists Fund was established in 1992 to support the arts department bringing a nationally recognized artist to the campus each year.