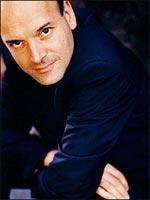 For 79 years, the annual Gratwick Concert has brought some of the world’s most renowned classical musicians to Milton’s campus. On Tuesday night, October 27, the tradition continued as the Gratwick series presented Canadian pianist Louis Lortie.

According to his Web site, Lortie has been praised for the fresh perspective and individuality he brings to a deliberately broad spectrum of the keyboard canon. He studied in Montréal with Yvonne Hubert (a pupil of French pianist, Alfred Cortot), in Vienna with Beethoven specialist Dieter Weber, and subsequently with Schnabel disciple Leon Fleisher, among others.

Also celebrated for his interpretation of works by Beethoven, Lortie has performed the complete Beethoven sonatas in London’s Wigmore Hall, Toronto’s Ford Center, Berlin Philharmonie, and the Sala Grande del Conservatorio Giuseppe Verdi in Milan. In Berlin, Die Welt called his performances “possibly the most beautiful Beethoven since the times of Wilhelm Kempff.” With the Montreal Symphony, he has performed and conducted all five Beethoven Piano Concertos and, most recently, the complete Mozart Piano Concertos.

The Gratwick Concert foundation was established by Dr. Mitchell Gratwick, a master at the Academy, in memory of his wife, Katharine Perkins Gratwick, who was a graduate of the Girls’ School, Class of 1924.