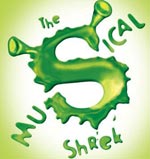 Alumnus David Lindsay-Abaire ’88—recipient of the Pulitzer Prize and Tony Award for his drama Rabbit Hole—recently wrote the book and lyrics for the musical adaptation of Shrek, the show that opened the 2008–2009 season for The 5th Avenue Theatre in Seattle. The story of the beloved ogre Shrek—a character created by author and illustrator William Steig and made popular by Dreamworks Animation—is a unique look at the fairytales so many of us grew up with, featuring an unlikely hero with friends and foes who are not always what they seem.

Interviewed for The 5th Avenue Theatre newsletter, David said that the creative approach he and his team took in writing Shrek The Musical was to ask, “What don’t we know? There are a lot of questions that the movie and the book raise that we were sort of curious about. Princess Fiona, for example—how long has she been in the tower, and what does she do all day?… And, Farquaad—what is his issue with those fairytale creatures and where did that come from? Those are all questions we answer in the musical version of this story.” David won the 2008 Kleban Award for most promising lyricist for his work on Shrek the Musical. The show will open on Broadway on December 14.

With many theater credits to his name, David has begun his move to the big screen. He is in negotiations to write Spider-Man 4 for Columbia Pictures, the most recent of the Spider-Man movies that will see the return of Sam Raimi as director and Tobey Maguire as Peter Parker turned Marvel Comics’ web-slinging hero.

The Hollywood Reporter previewed the upcoming film, saying, “Lindsay-Abaire has said in interviews that his plays tend to be ‘peopled with outsiders in search of clarity,’ which would put his work on sympathetic terms with Peter Parker, who in his classic incarnation is the perpetual outsider. The choice of scribe also signals that that filmmakers are intent to focus on character, something that critics said got lost in the third installment.”