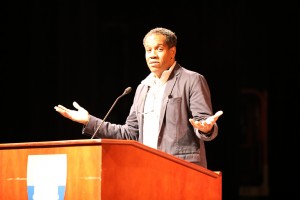 “Everyone is going to get something different from a poem, so I just have fun with it and let the world take it from there,” said Pulitzer prize-winning poet and memoirist Gregory Pardlo, who was “street testing” some new work during the Bingham Visiting Writer assembly.

Mr. Pardlo’s new poems explore ideas of faith. His visual, at times humorous, writing explores the death of a professional wrestler, the highs and lows of a long marriage and the personal relationship between father and son. After finishing with a couple of older poems from his collection Digest, Mr. Pardlo answered students’ questions about his writing process.

“I don’t believe in writer’s block,” said Mr. Pardlo. “When I feel myself saying I’m blocked, I’ll say that’s BS. It means there is something I want to say, but I haven’t given myself permission to say it yet.”

Digest won the 2015 Pulitzer Prize for Poetry. Other honors​ include fellowships from the Guggenheim Foundation, the New York Foundation for the Arts, and the National Endowment for the Arts for translation; his first collection, Totem, won the APR/Honickman Prize in 2007. He is the poetry editor of Virginia Quarterly Review and teaches in the MFA program at Rutgers University-Camden. His most recent book is Air Traffic, a memoir in essays.