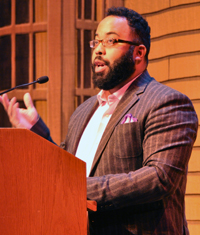 Kevin Young’s lyrical poems draw on themes of birth, death, food, heritage, New England and the South. The award-winning poet, this fall’s Bingham Visiting Writer, read a selection of new and old work to students on Wednesday in King Theatre.

Mr. Young began his reading with poems tinged with both humor and sadness from his book Dear Darkness (2008), written after the sudden death of his father. “When you write poems, you feel like you’ve exorcised that part of you, of what you are trying to say,” says Mr. Young, “but these poems have stuck with me. It’s a book of elegies, odes and blues. In the middle of writing it, I realized that the blues were odes and elegies combined; they’re a poem or a prayer song to what’s gone and missing.”

Mr. Young revisits the death of his father in his newly published book titled Bereavement. He also read poems from the collection about the birth of his son, and his student/teacher relationship with poet Seamus Heaney.

“It’s pretty hard not to write about the death of one’s father, or the birth of one’s son,” says Mr. Young. “Making the poems good is the challenge. The toughest part is finding a form, a way to make it not a diary, but a kind of daybook, a charting of those instances—some of which are tentative and harrowing, but also a little funny. I’m always tempted to take out the humor, but for me that’s part of grieving. It’s not just the long sadness of it; it’s the strangeness of it.”

Mr. Young is the author of seven books of poetry and editor of eight others, including Ardency: A Chronicle of the Amistad Rebels, winner of a 2012 American Book Award, and Jelly Roll: A Blues, a finalist for the National Book Award and the Los Angeles Times Book Prize, and winner of the Paterson Poetry Prize. His book The Grey Album: On the Blackness of Blackness won the Graywolf Nonfiction Prize, was a New York Times Notable Book for 2012, a finalist for the National Book Critics Circle Award for criticism, and winner of the PEN Open Book Award. Mr. Young earned his A.B. in English and American literature from Harvard University and an MFA in creative writing from Brown University. He is the Atticus Haygood Professor of Creative Writing and English at Emory University, in Atlanta.


Ode to the Hotel Near the Children’s Hospital


I Shall Be Released