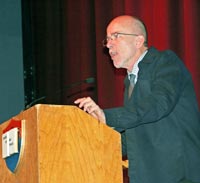 Poet Mark Doty’s expressive voice transported his Class I and II student audience from an early morning reading in King Theatre to a dimly lit space underground in the Village. His autobiographical poems invoked snippets of everyday life—a rural encounter with a goat, a city bus ride, a waiting room in a tattoo parlor.

I thought I wanted to wear
the Sacred Heart, to represent
education through suffering,

how we’re pierced to flame.
But when I cruised
the inkshop’s dragons,

cobalt tigers and eagles
in billowy smokes,
my allegiance wavered. …

English faculty member Lisa Baker introduced Mr. Doty, this spring’s Bingham Visiting Reader, as a “serious force in American poetry.” He introduced each poem with anecdotes that were both humorous and poignant. The poems themselves invoked powerful images and emotions.

His most gripping poem, which had students on the edge of their seats, was Heaven for Paul, an account of an emergency plane landing he experienced with his partner.

Around us people began to cry themselves,
or to pray quietly, or to speak to those with whom
they were traveling, saying the things that people
would choose to say to one another before
an impending accident of uncertain proportions.

It was impossible to hear, really, the details
of their conversations–it would have been wrong to try–
but one understood the import of the tones of voice
everywhere around us, and we turned to each other, …

The students burst into applause when he finished reading.  Mr. Doty took students’ questions—one, for example about his approach to editing his work, another  about whether he begins with a set “idea” for a poem when he sits down to write.

Mr. Doty’s Fire to Fire: New and Selected Poems won the National Book Award in 2008. He is the author of eight books of poetry and four volumes of nonfiction prose. His poetry has appeared in many magazines and is widely anthologized. He teaches at Rutgers University and is a frequent guest at Columbia University, Hunter College and NYU. He lives in New York City.

After his reading, Mr. Doty met with students in Straus Library to continue answering questions about his work and the process of writing poetry.