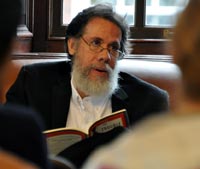 Tapping into his ancestral Puerto Rico and his 1960s Brooklyn childhood, Martín Espada’s poems weave stories of immigrants, family, music, racism and baseball. With passion and humor, he read from selected works to students in King Theatre, framing his poems with stories of how they came to be.

He moved chronologically through his life, charting the path that led him to poetry: growing up in the projects and meeting there his first real poet, a man “who spoke the truth.” Mr. Espada received his first book of poetry, Rubáiyát of Omar Khayyám, from his father. As mystified by a 17-year old as all parents are, Mr. Espada said, his dad was “throwing things at me to see what would stick.” Poetry stuck. Mr. Espada captures this experience in his poem, “The Playboy Calendar and the Rubáiyát of Omar Khayyám,” which he read to students.

Yet, alone at night, I memorized the poet-astronomer of Persia,
his saints and sages bickering about eternity,
his angel looming in the tavern door with a jug of wine,
his battered caravanserai of sultans fading into the dark.

Mr. Espada says now that he is a poet, he is “bombarded” with questions from young poets seeking advice, so he wrote a one-line poem titled “Advice to Young Poets.”

“Never pretend to be a unicorn by sticking a plunger on your head,” read Mr. Espada. He conceded that “another poet said it much better than I did, many years ago: ‘To thine own self be true.’”

Mr. Espada has published more than 15 books as a poet, editor, essayist and translator. His latest collection of poems, The Trouble Ball (Norton, 2011) is the recipient of the Milt Kessler Award, a Massachusetts Book Award and an International Latino Book Award. The Republic of Poetry (Norton, 2006) received the Paterson Award for Sustained Literary Achievement and was a finalist for the Pulitzer Prize. He has received other recognition such as the American Book Award, Robert Creeley Award, the National Hispanic Culture Center Literary Award, the PEN/Revson Fellowship and a Guggenheim Foundation Fellowship. A former tenant lawyer, Mr. Espada is a professor in the Department of English at the University of Massachusetts, Amherst.