As part of the Bingham Lecture Series, poet Michael Harper read and lectured in King Theatre to an audience of students and faculty on March 31, 2004. 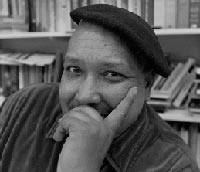 He peppered the poetry reading at Milton with anecdotes about students and teachers he has known, and the importance of those relationships. He told stories about John F. Kennedy, Jr. – a less-than-model student who made the mistake of cutting Mr. Harper’s class for an afternoon with Brooke Shields; Robert Lowell’s legendary toughness and efficacy as a creative writing teacher; and the frequent inanity of literary critics.

Mr. Harper also told students how his mother taught him to read and write: She read The Arabian Nights to him, prompting him to nickname his persistent and powerful little sister “Shahrazad.”
Michael S. Harper was born in Brooklyn, New York, in 1938. He earned a B.A. and M.A. from what is now known as California State University, and an M.F.A. from the University of Iowa. He has published more than 10 books of poetry, including Songlines in Michaeltree: New and Collected Poems (University of Illinois Press, 2000) and edited poetry collections. Other honors include a fellowship from the Guggenheim Foundation and a National Endowment for the Arts Creative Writing Award.

Established in 1987 by the Bingham Family, Barry, Edith and Emily ’83, the Bingham Lecture series brings writers, historians and journalists to speak and work with students and faculty at Milton.