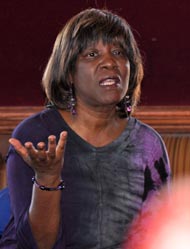 With a voice and delivery that showed why she is the most successful slammer in the history of National Poetry Slam competition, poet Patricia Smith read some of her work to students in King Theatre as this spring’s Bingham Visiting Writer. Known for writing from the point of view of her subjects, Patricia read a few pieces from Blood Dazzler, a powerful collection of poems where she personifies Hurricane Katrina as a woman and shows the death and destruction through the “eyes” of the storm.

“I consider myself a storyteller, and what goes hand in hand with that is witnessing,” said Ms. Smith. “And in order to witness, I have to look for an entry point into the story. And once I find that entry point, which may not be the one everyone expects, I start to shed myself. You can pretty much tell that my choice of syntax–that’s me. But I’m trying to become that person, that event, in that place as much as I can. And the stories I tend to approach are human stories.”

Ms. Smith is the author of six books of poetry, including Shoulda Been Jimi Savannah (2012), which won the Lenore Marshall Prize from the Academy of American Poets; Blood Dazzler (2008), a chronicle of the human and environmental cost of Hurricane Katrina which was nominated for a National Book Award; and Teahouse of the Almighty, a 2005 National Poetry Series selection published by Coffee House Press. Her work has appeared in Poetry, the Paris Review, the New York Times and in both Best American Poetryand Best American Essays. She is a 2014 Guggenheim fellow, a 2012 fellow at both MacDowell and Yaddo, and a two-time Pushcart Prize winner. She is currently working on a biography of Harriet Tubman, and a poetry volume combining text and 19th century African-American photos. Patricia is a professor at the College of Staten Island and an instructor in the MFA program at Sierra Nevada College.