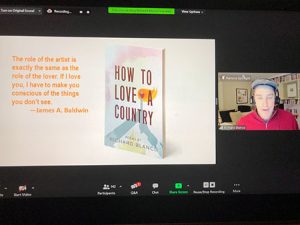 “A poem isn’t really done until it’s shared and lives in someone else,” said Bingham Visiting Writer Richard Blanco. Sharing his work that centers on ideas of home, identity, and nationality, Blanco read and discussed his poetry with students on a Zoom webinar.

“What is home? This idea grew bigger into what is a country? In my poems, I’m asking these questions for all of us,” said Blanco.

Blanco read poems from his most recent collection, How to Love a Country. He also read from Boundaries and showed students the photography by Jabon Bond Hessler that accompanies each poem.

In the poem “Complaint of El Rio Grande” Blaco said, “I wrote it with the voice of the river to speak to the absurdities of borders—they are just inventions and I let the river speak about that.”

Blanco also answered students’ questions about his writing process and the power of art and poetry.

Selected by President Obama as the fifth inaugural poet in U.S. history, Blanco is the youngest and the first Latino, immigrant, and openly gay person to serve in the role. His other collections include Matters of the Sea/Cosas del mar, Looking for the Gulf Motel, and Directions to the Beach of the Dead. He is the winner of the 2006 PEN/American Center Beyond Margins Award and of the 1997 Agnes Lynch Starrett National Poetry Prize. He is a Woodrow Wilson Fellow and has received numerous honorary doctorates. Blanco has taught at Georgetown University, American University, and Wesleyan University and currently serves as the first Education Ambassador for the Academy of American Poets.