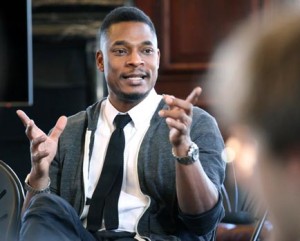 Mr. Hayes began with several poems from Lighthead, for which he won a National Book Award in 2010. His poems traverse a range of styles, from narrative verse to ars poetica lyric form, to experimental poems such as writing in the form of a mathematical puzzle.

“The fun for me is pushing against what I think of as my natural, comfortable voice. That’s most evident in the different kind of poems I write—like a poem that’s all questions and then all answers,” says Mr. Hayes. “I try to push my voice into different registers. But it’s always me. Ultimately, I’m writing all of it, so it’s impossible to get away from your inherent voice entirely.”

Mr. Hayes told students that he tries to avoid writing rituals and prefers to “change it up” with different approaches to his work. His writing involves constant revision, he shared, citing poems that have taken him more than a year to refine. In one such poem, which he read to students, he conflates two personal idols—singer Erykah Badu and writer Gertrude Stein—creating Gertrude Badu, a pretend high school friend full of life advice.

“You can do a lot with a poem, take it in any direction,” says Mr. Hayes. “Poetry isn’t 2 + 2 = 4; it’s more zebra + alligator = Cadillac. And the reader might think, ‘That’s interesting. I’m engaged, and I’m looking closer. I might not understand it, but I can still feel my way through it.’ That’s the way language works, and that’s what drives the construction of my poetry.”

Mr. Hayes was born in Columbia, South Carolina. He earned his B.A. from Coker College and his M.F.A. from the University of Pittsburgh, where he is a member of the English department faculty. How To Be Drawn, his most recent collection of poems, was a finalist for the 2015 National Book Award and the 2016 National Book Critics Circle Award; it received the 2016 NAACP Image Award for Poetry. His honors include a Whiting Writers Award, a National Endowment for the Arts Fellowship, a United States Artists Zell Fellowship, a Guggenheim Fellowship, and a MacArthur Fellowship.