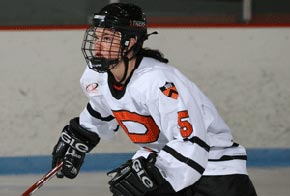 Milton alumna and Princeton University senior Liz Keady ’03 was recently granted the 2008 Sarah Devens Award from ECAC Hockey and Hockey East. The award is given each season to a player who “demonstrates leadership and commitment both on and off the ice.” Liz, a forward for the Tigers’ team, is the first Princeton student-athlete to receive the Devens Award.

According to the ECAC Web site, “[Liz] registered double-digits in scoring for the fourth consecutive season amassing 19 points (9 goals and 10 assists) in 28 overall games this past season, while playing most of the season with four fractures in one foot and a bad back. One of her on-ice achievements for the season was earning ECAC Hockey Player-of-the-Week honors… scoring three goals and adding three assists in leading Princeton to three victories. Off the ice… [Liz] has organized hockey-related programs such as Skills N’ Drills, and taught power skating and stick handling skills. During the summers, [she] assists with a hockey humanitarian program called “Teaming Up,” which raises awareness and money for maternal health in developing countries.” Liz has also played on the U.S. National team and, after graduation, plans to pursue a career in hockey.