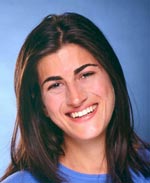 Jehane Noujaim, Class of ‘92, comes back to campus on June 6 as the 2008 Milton Academy graduation speaker. Jehane is not only a provocative, successful, young documentary producer and filmmaker; she is an international activist who believes passionately in the power of film to help move people toward global acceptance of diversity.

Jehane started making movies at Harvard College, from which she graduated magna cum laude in 1996 with a degree in Visual Arts and Philosophy. Prior to graduating, Jehane earned a Gardiner Fellowship and used it to direct Mokattam, a film about the community of garbage collectors (Garbage Village) outside Cairo, for the Harvard Center for Middle Eastern Studies. After college, her professional life began in the MTV news documentary division, where she was a producer for the seriesUnfiltered. She has worked as cinematographer both in the Middle East and in the United States for the documentaries Born Rich, Only the Strong Survive andDown from the Mountain. She was both a producer and director for the award-winning documentary Startup.com. In 2003, she made the documentary film Control Room about Al Jazeera, the U.S. military’s Central Command and their contrasting ways of reporting the United States’ invasion of Iraq. About Control Room the New York Times said, “Through the deceptively simple practice of watching, listening and editing, Jehane Noujaim captures the complexity of reporting, and has a great deal to say about truth, democracy and the ambiguous status of the free press in the modern world.”

Born to an Egyptian/Lebanese/Syrian father and an American mother, Jehane grew up in Cairo, Egypt before coming to Milton. As a young person, she discovered through her own photography the power of visual imagery to move people. An exhibit featuring her images of the Mokattam Garbage Village, which she took when she went with her mother to help that community, stimulated such strong public reaction that image by image, the exhibit was disassembled until only three photographs remained. The images affirmed a reality that many preferred to leave unexplored.

After the 2004 release of Control Room, Jehane was awarded a 2006 TED prize. TED began in 1984 as a conference devoted to the converging fields of technology, entertainment and design. Each year the conference gathers 1,000 of the world’s leading thinkers and doers; offers them four days of rapid-fire stimulation; and facilitates the implementation of their ideas.

The TED Prize takes three great ideas each year and seeks to achieve goals of global impact. It is designed to leverage the TED community’s array of talent and resources. The three exceptional individuals who win the TED Prize each receive $100,000 and, much more important, the granting of “One Wish to Change the World.” After several months of preparation, they unveil their wish at an award ceremony held during the TED Conference. These wishes have led to collaborative initiatives with far-reaching impact.

You can listen to Jehane unveil her wish for a world-uniting international celebration of film in her TED conference speech at http://www.ted.com/index.php/talks/view/id/55. Her goals with this idea are to bring together millions of people from all over the world in a unique shared experience; use the power of film to create a better understanding of one another; and form a global community striving for a better future.

That celebration, called Pangea Day, is a live videoconference that will take place in New York City, Rio de Janeiro, London, Dharamsala, Cairo, Jerusalem, and Kigali on May 10. The show will take place over 4-hour broadcasting through Internet, television and mobile phones. It will feature films, speakers, and music.