Professor Blake Gilpin ’97 On the History We Create 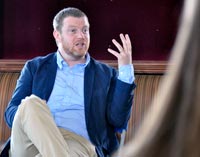 “History is not science. It’s spin,” Professor Blake Gilpin proposed to students this week. This year’s Henry R. Heyburn ’39 Speaker in History, Dr. Gilpin used his expertise on the 1850s abolitionist John Brown to illustrate how the narratives of history are created: by combining fact, perspective, and sometimes imagination.

Dr. Gilpin, a professor of history at Tulane University, has spent a decade studying John Brown and the cultural phenomena surrounding the man and his legend. “Many historians have written about John Brown, and using the exact same facts, the same details, some have painted him as a lunatic; some as a depraved criminal; and some as a civil rights hero akin to Martin Luther King.” Dr. Gilpin walked students down a short but rich biography of John Brown—details that made clear what led him to the events at Harpers Ferry, Virginia; his trial; his death; and the connection of his actions to the American Civil War.

“You are all historians, the moment you learn two facts and link them together, creating a narrative,” says Dr. Gilpin. “Our history actually tells us more about who we are today than about people in the past. And that’s okay. We need that narrative, that context, to make sense of who we are, and where we are, now.”

Though a self-proclaimed “Yankee,” Dr. Gilpin is a scholar of southern history whose first book, John Brown Still Lives!: America’s Long Reckoning With Violence, Equality, and Change, was published in 2011. The book was a finalist for Gilder Lehrman Center’s Frederick Douglass Book prize. His dissertation, the foundation for his book, won the 2010 C. Vann Woodward Prize from the Southern Historical Association for the best dissertation in Southern history. Dr. Gilpin received his Ph.D from Yale University. With Rose Styron, Dr. Gilpin edited the correspondence of Virginia author William Styron, Selected Letters of William Styron. A New York Times Editor’s Choice, the book was nominated for a Pulitzer Prize.

Dr. Gilpin spent two days on campus, talking with students in U.S. History classes about John Brown, the study of history, and how what we learn from the past helps to inform us in approaching the challenges of today’s world.