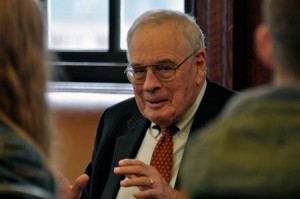 Professor Warren McFarlan ’55 has a long and distinguished career in business education. On Wednesday morning, he leveraged his Harvard Business School professorial skills for the benefit of Milton’s Class I and II students, as this year’s Hong Kong Lecturer.

“There is no question that China will be a global leader in your lifetime,” he began, “but will they be the future, world economic leader?” This is the question that he and his colleagues probe in their recent book titled, Can China Lead? Reaching the Limits of Power and Growth.

“What built China in the last 35 years is not what will build them in your professional life,” he continued to students. “Almost everything you are wearing right now was made in China. However, the country is moving away from a manufacturing economy and toward a consumer driven economy—and this will pose challenges.”

Professor McFarlan compared the U.S./China connection of 1955 to that of 2015. In his time at Milton, the first and last he heard of China was in studying silk worms as an eighth grader. Now several members of Milton’s board of trustees are from China; 38 percent of foreign students in Boston are Chinese; 12 nonstop flights leave Logan Airport for China each day; and more than 275,000 Chinese students are studying at American colleges and universities.

Professor McFarlan first traveled to China in 1979, as a faculty member at Harvard Business School (HBS), where he earned his MBA and DBA. A Chinese HBS alumnus arranged the trip, which Professor McFarlan describes as “the most formative three weeks of [his] life.” He returned to Harvard with the message that connection with China should be a priority for the school. Professor McFarlan helped to establish a relationship with Tsinghua University, “the MIT of China,” he says, and over a period of 15 years, helped produce many case studies on Chinese companies, first written in Mandarin then translated to English. Professor McFarlan is now guest professor and co-director of case development for the School of Economics and Management at Tsinghua University in Beijing.

Professor McFarlan outlined to students China’s clear strengths—confidence, drive, a technology focus, a significant population, and a large geographic area that is “the last great empire to remain intact.” He also spoke about some of the country’s challenges: poor air and water quality, food safety issues, freedom of speech limitations, and human rights issues.

“China is a ‘hardware’ economy, very good at building and making things. Right now, they are not a strong ‘software’ economy—not yet skilled at offering quality service and consumer relations,” says Professor McFarlan. “Overcoming those challenges will take time. In order to be a global economic leader into the future, the country will need to focus on those issues.”

Professor McFarlan became a full professor at HBS in 1973, and he has held diverse leadership positions at the school since. He served on Milton’s board of trustees from 2001 to 2014 and helped to define our School today. With roots in teaching, business, Asia and international relations, he has offered Milton critical perspective over many years.

The Hong Kong Distinguished Lecture Series brings to campus speakers who raise awareness about issues of concern in Asia and help us better understand the cultures, art, and history of Asian countries—home to many of our students. Former trustee, Helen Lin, Class of 1981, along with more than 100 graduates living in Hong Kong, established the series in 1998.