The Milton Academy boys’ basketball program competes in the one of the nation’s deepest and most talented leagues. Achieving school record breaking success over the past few seasons this program is one that is truly on the rise in New England. “Surround yourself around good people and great things happen.” That has been the motto around the program and you can see it in true form if you’ve ever spent time around Coach Lamar Reddicks and his program.

The job of the coaching staff here at Milton Academy is to mold our basketball team into a family and teach players to handle not only the successes but also failures on the court and in life. Success is much more than a scoreboard. We view these beliefs as a roadmap for better decision-making and deeper, more meaningful experiences for our team.

The team commits to several community service projects throughout the season. We will run a basketball clinic for kids and also go into the Boston and read books to students in grades K–4. Later in the season the team will also host these kids at a home game and invite them to be a part of the pre-game activities. This creates a special bond between both sets of kids who benefit from these projects. “It’s great to see how the younger kids look up to our players both literally and figuratively,” says Coach Reddicks.

This is a very exciting time in our program. The pieces of the puzzle are coming together quickly and hopefully translate into a long and successful run for Milton Academy. We’d like to say thank you to everyone who has supported our program!

Head Coach: Lamar Reddicks
Lamar Reddicks is in his twelfth year here at Milton Academy as varsity boys’ basketball coach and also serves as the director of athletics, his roots in the town of Milton run deep. A member of Milton High School’s 1996 state championship basketball team, Lamar was inducted into Milton High School’s Athletic Hall of Fame in 2007 and his high school team was enshrined in 2010. Coach Reddicks has long been involved with New England basketball After captaining the men’s basketball team at Bentley College, Lamar spent eight years coaching at the collegiate level, working with Harvard’s and Boston University’s men’s teams. Lamar has been fortunate to be associated with some outstanding institutions that all have a great combination of academics and athletics. In 2010-2011, Coach Reddicks was the recipient of the NEPSAC Coach of the year award for boys’ basketball, and he has received ISL Coach of the Year the last two seasons. Attracting and developing players is an important part of the success that Lamar has had since being here at Milton Academy and is extremely proud of the opportunity to coach the young men in his program. 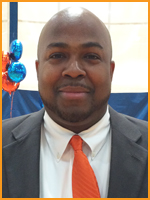