Coach Lewis will be entering his 2nd Season with the program, where he is currently the Boys’ Team – Head Sprints and Horizontal Jumps Coach. Chris is also an Assistant Director in the Admissions Office and an Assistant Varsity Boys Soccer Coach. Chris graduated from Milton in 2015, where he was a stand out athlete and during his senior year he led the Soccer Team to an undefeated regular season where he was named ISL Defensive Player of the Year. He was also a stand out on the Track and Field Team and played a key role helping the team to an undefeated season capturing the Team’s First ISL Championship in over 30 years. After Milton, Chris went on to Amherst College and helped the team earn its first and only National Championship in the Fall of 2015. Chris lives on campus in Hathaway House on East Campus with his wife Molly Gilmore ‘12.

Gabby is entering her 2nd season as an Assistant Coach (Girls Sprints, B&G Hurdles & B&G Pole Vault). She is also an Assistant Coach for the Girls JV Volleyball and 3rd Girls Basketball Teams at Milton. Gabby is a graduate of Merrimack College ‘20 where she was a stand out for the Women’s Track and Field Indoor and Outdoor Programs. As a Multiple Events Athlete, she competed in 24 different events during her career including several pentathlons. Her senior year she was a recipient of the Athletic Director’s award, an award that recognizes seniors who best epitomize what it means to be a student athlete at Merrimack. Gabby resides in her hometown of Easton, MA, where she was a Three Sport Standout Athlete (Volleyball, Indoor and Outdoor Track) at Oliver Ames High School ‘13.

Holt is entering his 4th year as a Throws Coach focussing on B&G Javelin. Before coming to Milton, Holt was a standout track and field athlete at Bentley University. At Bentley he was an All-American Javelin Thrower where his current school record of 214’ 10” which still stands. He still competes as a member of the Boston Athletic Association.

Shakeen is in his first year as an Assistant Coach helping with Boys Sprints and Jumps. Shakeen was a stand out athlete and a member of the Track and Field Program at Umass Dartmouth where competing in the 400 and 200. He is currently the Dean of Students at the Brooke Charter School in Roslindale and currently resides in the Boston area. 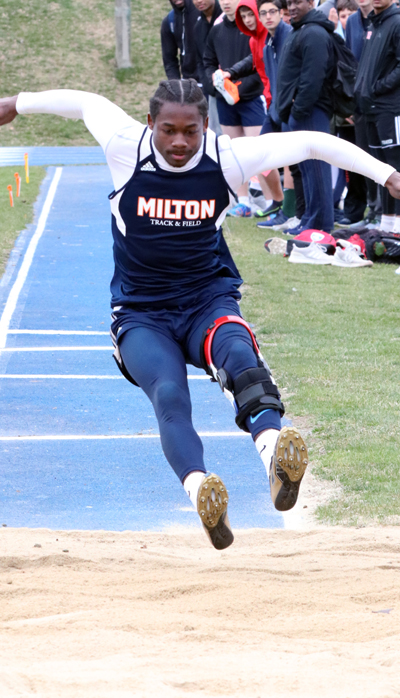