Milton girls’ soccer is a program full of tradition, strength and, most importantly, dedicated players and coaches. One of the finest prep school programs in New England, the girls’ 1st team has won three ISL championships, one New England Championship, and was New England runner-up in 2006.  Recent graduates are currently playing at Brown, University of Rochester, Claremont McKenna, Columbia, Amherst, Vasser, and Colby.

One aspect of the Milton soccer program that sets it apart is the tremendous strength and conditioning program that is part of the in-season schedule. The School is fortunate to have a resident expert on the faculty, Steve Darling, who works with the girls during the season (and offers an after-school program in the off-season for those not playing another sport). The strength and conditioning program helps improve core strength, speed and flexibility with the goal of reducing injuries and improving performance. The girls find these twice-a-week workouts challenging, but the results (fewer injuries and quicker recovery time) have been apparent.

Traditions that are passed down every year are important to the girls’ soccer program:

Whether a player is competing on the 3rd team or on the varsity team, the expectation is that they will play with pride and determination and will represent Milton to the fullest. The coaching staff supports this effort by fostering not only technical and tactical play, but also the camaraderie that is essential to a positive experience in any athletic endeavor.

Head Coach: Rachael Abernethy
Rachael Abernethy joined the English Department and the Girls’ Varsity Soccer team in 2021. Coach A served as an assistant for two seasons before becoming the Head Coach. She played soccer at Amherst College for four years. After graduating, she went on to teach and coach at Northfield Mount Hermon while pursuing a Master’s in Education through the University of Pennsylvania.  Her graduate thesis analyzes the connections between teaching writing and coaching soccer. Coach A continues to love and learn from the game. She lives in a dormitory on the Milton campus with her husband, Luke, and puppy, Paint.

Assistant Coach/Goalie Coach: Jamie LaRochelle
Jamie LaRochelle continues in his role as the goalkeeper coach. In addition to training the varsity keepers on a daily basis, Coach LaRochelle trains all of the keepers in the girls program twice a week. Coach LaRochelle teaches in the Science department, lives in campus housing and works in one of our dormitories, and coaches our swimming and diving team.

Girls’ Soccer Coordinator: Peter Kahn
Coach Kahn joined the math department at Milton in the fall of 2002 and worked with the boys’ program for three years before moving over to the girls’ side where he was the head coach of the Varsity Team for 18 seasons.  Coach Kahn now coordinates within the girls program to create alignment among the different teams and support player development at all levels.  Prior to his arrival at Milton, Coach Kahn was the girls’ head coach at Blair Academy in Blairstown, New Jersey.  He also had a successful career as a player at Johns Hopkins University, including three selections to the NSCAA Division III Regional All-American Team and a trip to the National Championship game in 1994.  After many years in the dormitory, Coach Kahn now lives in campus housing with his wife Karin and their sons Davis ‘25 and Carter ‘29. 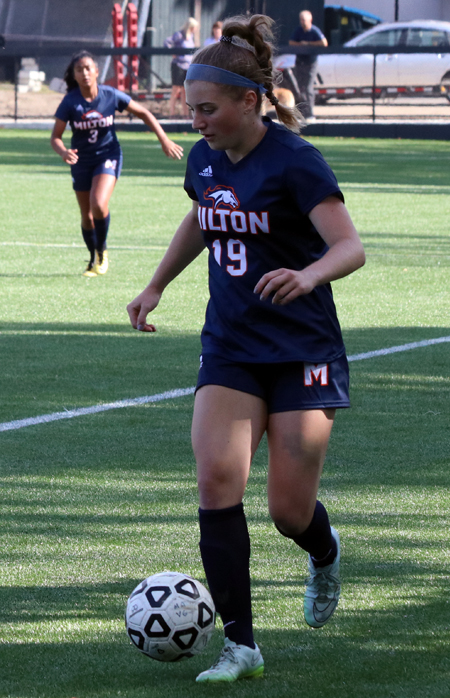