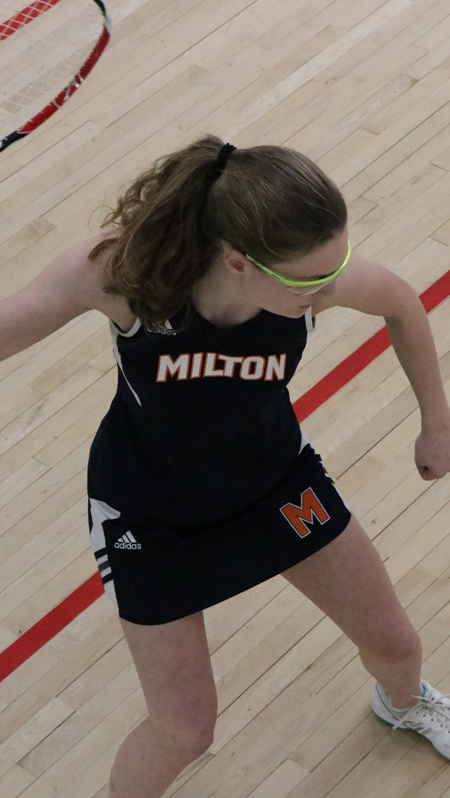 The opening year of competition for the girls was 1975-1977. The first coach was Dolly Sullivan, the Girls’ Athletic Director. The girls’ squash locker room is named in her memory. Dolly was succeeded by Peter Keyes who was assisted by Christy Millet from 1986-1990, Susan Case in 1994, and Martha Bisbee. The girls’ coach for the 2002-2003 season was Keri Hughes ’97. After a slow beginning, the girls’ teams have compiled an enviable record of eleven straight winning seasons for a total record of 151 wins and 89 losses; 63 percent. Perhaps the strongest group of players for the girls was Emily Ash, Sascha Greatrex, Kate Grossman, Kerin McGlame, and Holly Williams, who in the years 1989-1991 helped gain 4th, 1st and 2nd place in the New England Interscholastics.

Milton has a long history of producing players capable of making the successful jump to playing college squash.  Over the last few years we have had nine players continue to play in college at Harvard (2), Dartmouth (2), Princeton, Williams, Vanderbilt, Georgetown and Virginia. It is wonderful to see many of our graduates, including Kristin Rubin ’06 (Hamilton) and Cece Cortes ‘07 (Harvard), become captains of their college teams. We look forward to continuing this rich tradition over the coming years.