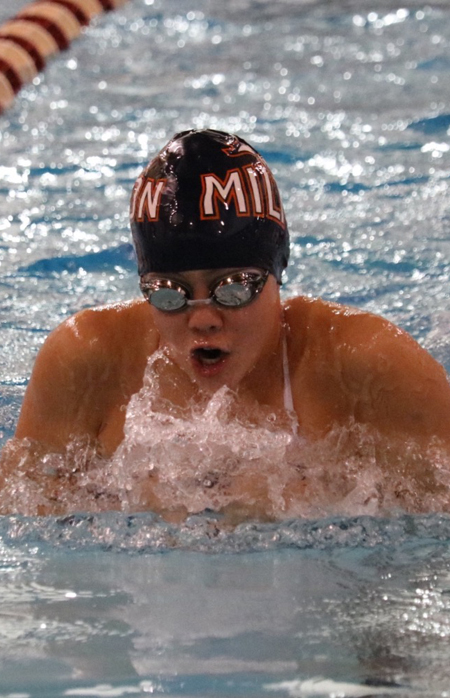 Milton Academy’s swimming and diving team prides itself on hard work and good sportsmanship. We offer spaces on the team for all levels of swimming expertise, competing in meets at least once a week on Wednesday, Friday, or Saturday. Our season begins mid-November and ends in the first weekend of March with the New England Swimming and Diving championships.

Grounded in its strong team spirit, Milton’s co-ed swimming and diving team cares about individual improvement, team support, and having a good time in the water.  The team practices Monday through Friday at UMass Boston.  Swim practices usually combine a team stretch, dry-land work for both core strength and power and then water work that includes a healthy dose of stroke drills, kicking and breath control.

Milton Academy welcomes divers of all levels, from those with competitive experience to those looking to make the transition from gymnastics or other sports. The team works daily to improve flexibility, form, and basic technique while building each diver’s repertoire of required and optional dives. Video playback and individual coaching is used regularly to support each diver’s development. Milton divers compete on the 1m springboard during meets, and in championship meets at the end of each season. The team enjoys a strong bond, and also competitive success—placing multiple divers in the top ten at the 2011 New England Championships.

Coach Bob Tyler and Coach James LaRochelle both embody a coaching philosophy that focuses on the quality of practice, not the quantity of yards.  They train swimmers to focus on their technique in strokes—with good technique comes speed—and to swim smarter races.  Each swimmer and diver deserves and receives individual attention from both coaches and also is able to see his or her strokes through the footage of an underwater camera.

In recent years the Milton swim team has been steadily rebuilding after losing several strong swimmers to graduation, but that has never detracted from the central focus of the team—hard work and strong spirit.  Coming off a 2010-2011 season where the boys team finished with a 5 – 5  record and the girls team finished with a 6 – 5 record, the 2011-2012 team looks to improve that record while at the same time maintaining the core values that define the team.

In his twenty-third year as the head coach of the Mustangs, Bob Tyler has seen the program grow from its humble beginnings when most swimmers arrived with little competitive experience to the present day where serious top-ranked New England swimmers come to train. Besides coaching at Milton, Bob has spent his summers as one of the assistant directors at the Technique Swim Camp at Harvard. Additional coaching work includes assisting with the Northeastern University Swim team, Bernals’ Gator Swim Club and Avon Old Farms School varsity swim team. 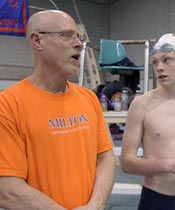 Suzanne DeBuhr has been a member of the Milton swimming/diving coaching staff since the 2009-10 season as the head diving coach. She began diving when she was 8 years old and continued to dive both in high school and college. Coaching diving is one of the highlights of her work at Milton, which also includes teaching religion and psychology courses in the History Department, coordinating the school’s Affective Education program, and overseeing the chapel program. 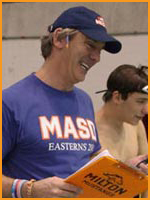