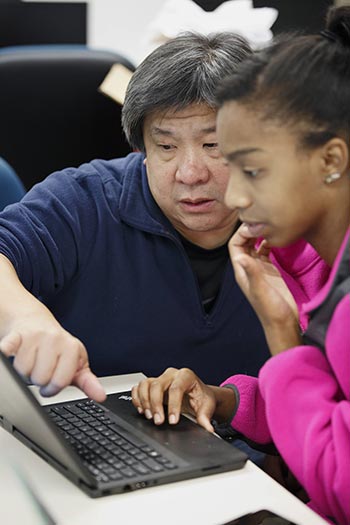 Kendall Chun, computer science teacher and director of the Outdoor Program, spent the early part of his career working in the biomedical industry, but his love of the outdoors conflicted with the 9–5 life.

“My degree is in electrical engineering, so I worked in that field for several years before going back to school and getting my master’s in education,” Kendall says. “I realized that working in a cubicle in a room with no windows, staring at a screen all day, was not for me.”

Prior to arriving at Milton, Kendall worked as the director of technology at Cushing Academy. He was hiking with friends in Joshua Tree National Park where he met Milton science teacher Matt Bingham, who asked to join Kendall’s group on a climb. Years later, Matt encouraged Kendall to apply to be the Outdoor Program director at Milton. This is his 13th year at the School.

Kendall has watched the computer science offerings at Milton grow from four class sections to more than a dozen, along with the addition of several related student clubs, including programming, robotics, and Girls Who Code.

“This year, I’m teaching Intro to Computer Programming and Applied Engineering, which is a new course,” he says. “Students are learning to build projects that interact with the physical world but also use their programming skills.”

Kendall uses his engineering skills in his down time, too: He restores vintage arcade games and stereos, and he volunteers at “fix-it clinics,” during which people bring in older appliances for repairs—the goal is to keep appliances working for longer and to keep them out of landfills.

He’s also a skilled photographer, capturing daring moments from the Outdoor Program, including sea kayaking and ice climbing. Some of his photos can be seen in the first floor of Wigglesworth Hall.

Kendall grew up in Queens, New York, commuting to Manhattan for school. When he was a child, his parents sent him to Camp Tohkomeupog in Madison, New Hampshire, where he began hiking and going on canoe trips at the age of 7. The outdoors has “always been a part of my life,” he says.

There are a few separate components to the Outdoor Program: First, there is the afternoon program—instead of competing in a team sport, students can choose to take rock-climbing, sea kayaking, or hiking, depending on the season. Then there are weekend trips, where students can sign up to take part in activities all over New England.

“We just did an ice-climbing trip,” says Kendall. “We do hiking, biking, mountain biking, kayak surfing, white-water kayaking and rafting; we’ve done cross-country skiing and mountaineering up Mount Washington in New Hampshire. We offer a lot of different things.”

Finally, the Outdoor Program offers spring break trips. Past trips include Baja, California; the Bahamas; Zion National Park; and Joshua Tree. Some of the participants are experienced campers and hikers, while others are first-timers.

“It’s happened several times that we’ve been out on a trip and one of the students will say they’ve never slept in a tent before, while others have had family trips or camp experiences,” Kendall says. “We get a huge range.”

Kendall hopes the students who participate in the Outdoor Program are building a lifelong appreciation for getting outside.

“There are so many benefits for mental and physical health, they’re enjoying the beauty of the outdoors and the world around us,” he says. “It’s time away from their screens and phones, where they challenge themselves. They’re trying new things, learning what they’re capable of doing. Hopefully, it’s instilling a sense of stewardship in them to take care of the lands they’re exploring, national parks, and their local environments.”