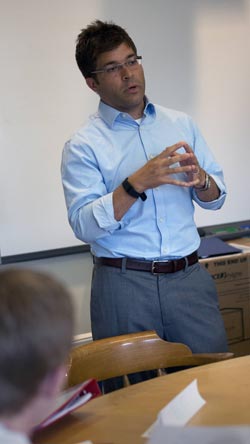 After graduating from Dartmouth College, Matt Blanton wanted to take a short break from the pre-med track he was on and teach. He earned a one-year fellowship at the Taft School, where he taught math. One year turned into six, because Matt discovered he loved teaching.

“I also realized that I liked teaching as a profession more than I liked the topic of math,” says Matt. “I liked working with students on what I call social issues—race, class, gender, sexuality. But I felt I didn’t have the academic training to be an appropriate teacher for those topics, so that was the impetus to go back to school and move away from the sciences and math into the humanities.”

He went to University of Wisconsin to earn his master’s in African American studies and to University of Michigan for his Ph.D. in American Studies. His dissertation on race and masculinity in late 19th- and early 20th-century college football grew out of his work as an academic tutor for the Wisconsin athletic department, where he worked closely with football players.

“I was a fan of the game, but I was not familiar with the craziness, intensity and passion that Wisconsin Badgers fans have for their teams. I started to wonder how it got to be like this. During school days, I was seeing these players working on calculus problem sets or writing essays and then on Saturday I was watching them on ESPN’s SportsCenter. I started to question how it evolved, and while a Ph.D. student, I kept going back in time to get the answers until I got to the very beginning.”

Five years ago, Matt’s wife, who is also a history professor, got a job at Wellesley College, which brought them back East. Matt is in his first year as a faculty member of Milton’s history department. He is teaching a section of Modern World, two sections of U.S History, and one semester of African American History.

“My students are all dedicated, curious and quirky. The freshmen bring energy and a bright-eyed, bushy-tailed attitude that has not lagged at any point in the year. Not to say juniors and seniors don’t have that; they just have a quiet maturity about them, while still being fun. I was drawn to Milton because it sounded like a school where the students take their academics seriously. You don’t need to prod them to get their work done. They are self-motivated and inspired. I don’t have to worry about anything except exploration, interrogation and historical analysis, which is what I like to do.”

Outside of class, Matt, who played soccer at the college level, is an assistant coach to the boys’ varsity soccer team. He picked quite the year to join the team that went 22-0, earning ISL and New England championship titles.

“It was quite an achievement. The individual achievements were spectacular, but what made the season a real success is that none of the individuals touted their specific goals over that of trying to do what was best for the squad. And that emanated from Coach Chris Kane on down through the captains down to the players. It was really exciting to be a part of this team.”