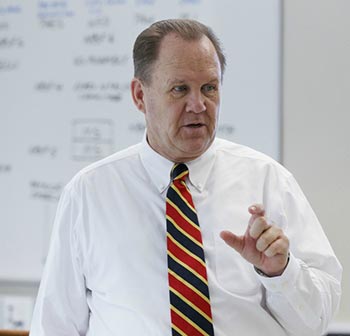 Learning to speak with eloquence and clarity, being able to argue a point respectfully, and grasping all sides of an issue are skills that serve students for life, says Dr. Matthew Brandstetter, Milton’s new speech and debate coach.

“Regardless of the professional field they go into, the skills developed in speech and debate hold students in good stead, whether they find themselves speaking to a board of directors or interviewing for a position,” Matthew says. “Even in the college-admissions process, learning to speak intelligently and cogently is an essential skill.”

Milton’s required Current Events and Public Speaking course and the School’s award-winning, competitive speech and debate teams also force students to think critically about current events and public issues, Matthew says. Students have to be able to understand and contextualize a wide range of national and international public issues in order to compete.

“It’s not just a social activity where students get together and talk,” he says. “It’s on the same par as performing arts or athletics, or any program that requires a certain amount of diligence, preparation and practice.”

Matthew, who grew up in southern California and owns a home in Sacramento, entered the world of competitive speaking during his freshman year of high school, when his guidance counselor asked what Matthew might want to do when he got older. Matthew said, “I think I want to be a lawyer,” and the counselor told him he needed to do speech and debate. He was hooked immediately.

Though many students stop competing in speech or debate after high school, Matthew continued in college after receiving a full scholarship to Brigham Young University, where he earned national awards in extemporaneous speaking and debate. After two years at BYU, he completed his bachelor’s degree from the University of California, Irvine. He also holds a master’s degree from the University of San Francisco, and an Ed.D. in educational leadership from Argosy University.

He has taught at the university and high-school levels, founding and coaching nationally ranked speech and debate programs at several high schools, including as a founding faculty member of the upper school at the Harker School in San Jose, California.

Matthew describes Milton students as respectful and highly intelligent, which gives them an advantage on an increasingly competitive national speech and debate circuit.

“It makes my job more delightful, because they get it,” he says. “Now it’s a question of taking them from a rather high degree of excellence to the next level.”

There are several paths that speech and debate students can take toward competing on the state, national and even international levels. Milton’s students have competed in the National Speech and Debate Association’s tournaments, as well as those for the National Catholic Forensic League, the Tournament of Champions, and the Debate Association of New England Independent Schools. So far this fall, seven Milton students have qualified for the Massachusetts Speech and Debate League tournament in the spring.

During a 38-school tournament in Atlanta last month, Jana Amin (III) and Maya Bokhari (II) earned bids to the National Tournament of Champions in April by placing first and second, respectively, in original oratory. Orators in this category write and deliver a speech on a topic of their choice. Tony Wang (II) and Tim Colledge (III) won first place in public forum debate at the same event, with each earning individual awards.