Puppet Boot Camp: A Pit Stop on the Journey to Avenue Q 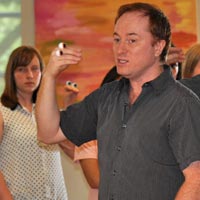 Auditioning for a part in a school musical can be challenging. You have to know how to sing, how to act, how to dance, and how to do all three at the same time. Now add to this list the skill of puppeteering? That’s a new talent Milton’s actors will need to master to make the cut for this year’s fall musical, Avenue Q. Witty and full of high-energy, Avenue Q takes us on a ride to New York City to meet Princeton, a recent college grad who moves next door to a colorful range of characters. These characters—including Princeton—are puppets.

This type of production is a first at Milton, and pulling it off is a challenge—making the puppets come to life. To face this task head on, Milton invited an expert in the field, Kevin Noonschester, to join the audition process and run a boot camp—a puppet boot camp. Kevin, a puppetry instructor, most recently played the role of Marlin in Disney’s Finding Nemo: The Musical, and was part of the Las Vegas company of Avenue Q, playing the roles of Princeton/Rod and Nicky/Trekkie. Kevin is also a member of the Henson Company’s “Puppet Up”—an improv troupe responsible for Henson’s Stuffed & Unstrung. Also known for his voice-over talents, Kevin can be heard coming out of actors Jason Bateman in The Change Up and Chris Pine in Unstoppable. Video game players can hear Kevin as Jack Frost in DreamWorks’ “Rise of the Guardians” video game.

During boot camp, Kevin drilled students on the basics of bringing puppets to life—making their characters breathe like real singers, observing the punctuations and rests; having the puppets’ eyes always facing the audience; and creating movements that appear realistic and effortless.