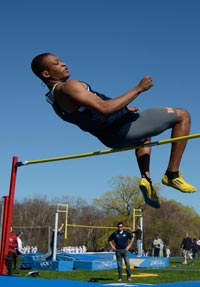 If breaking four school records so far this season wasn’t enough, the boys’ track and field athletes made sure to make their mark in Milton’s history books by winning the team’s first ISL Championship in 24 years. The Mustangs scored 100 total team points in this weekend’s ISL meet, pulling out a nail-biting win over tough ISL competition—including last year’s champion, Thayer. During the course of the day, 11 athletes on Milton’s squad accomplished at least one personal record. The team’s victory was decided in the final event, where Captain Bobby Gilmore (I) placed 2nd in the Discus.

“Before the final round of throws, Bobby completed the biggest pressure throw of his life,” said  assistant coach Steve Darling. “After fouling his first two attempts in the prelims, his third throw landed at 120′ and allowed him to advance to the finals. Had Bobby fouled on his third attempt, he would not have made the finals and the team would have lost by one point. In the finals, Bobby landed a throw at 143′, securing 2nd place and the team victory.”

View a photo of the ISL Champs.