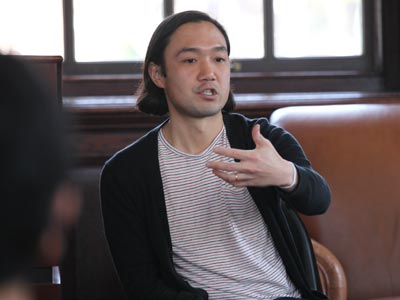 “Books were my first teachers, my best teachers,” writer Paul Yoon told Milton students while on campus as this spring’s Bingham Visiting Writer.

During his reading, followed by a Q&A with students, Mr. Yoon described his evolution from a voracious reader to a writer (“It was like falling in love”) and explained that his inspiration for writing comes from the books that move him. When he reads something special, he writes to “respond” to that work.

“As a student in the 90s, a lot of the curriculum was based on the work of dead authors,” he said. “Although I loved it, because they were writing in a time that wasn’t mine, I felt really distanced from it. It was when my teachers gave me contemporary books, books from authors of color, that I came to think about writing as an active art form.”

Mr. Yoon read part of “Galicia,” a short story in his new collection, The Mountain, which follows characters across time and continents, beginning in his birthplace, New York’s Hudson River valley.

“It’s a little audacious to decide, ‘I’m going to write a book set all over the world’” he said. “So I started in New York, where I was born. I needed that kind of grounding in a place I was so familiar with, and then I could go on a wild adventure.”

Asked about his process, Mr. Yoon said he starts small—beginning with a sentence or a minor detail—and lets his characters develop without a formal outline; of “Galicia’s” main character’s decision to leave home with a stranger, he said, “I didn’t know she was going to do that.”

Mr. Yoon said he is struck by violence: how it shapes people, what it takes from them, and what happens to all of us because of our constant exposure to news of violence, he said. His debut novel, Snow Hunters, uses spare, minimalist prose to illuminate the effects of war on his characters.

Mr. Yoon encouraged students to embrace the messy parts of putting words to paper. Doubt can be powerful and insidious, even after a writer achieves publishing success.

“We all, as writers, should strive to be more forgiving of our first drafts,” he said. “You’ll have doubt, but what’s the other option? Not going for it? I say go for it.”

Mr. Yoon’s first book, Once the Shore, was selected as a New York Times Notable Book, a Best Debut of the Year by National Public Radio and won a 5 under 35 Award from the National Book Foundation. His novel, Snow Hunters, won the 2014 Young Lions Fiction Award. He is a former fellow at the New York Public Library’s Cullman Center for Scholars and Writers, and his stories have appeared in Harper’s Magazine, VQR, the PEN/O. Henry Prize Stories, and The Best American Short Stories. The Mountain was released in the summer of 2017. He lives in Cambridge, Massachusetts, where he is currently a Briggs-Copeland Lecturer at Harvard University along with his wife, the writer Laura van den Berg.