Real Community in a Virtual Classroom 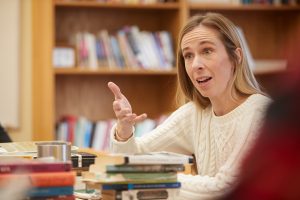 In English and history classes, learning stems from conversations, focusing on discussion with peers, not lectures from teachers. When Milton had to abruptly switch to remote learning in the spring, faculty had to figure out how to shift this experience from in-person to virtual. English Department Chair Nicole Colson said that while being in a space together is the ideal, she found the overall experience to be positive.

“When you build a real community in your classroom, it doesn’t go away when you shift over to remote learning,” said Colson. “Who they were in the classroom is who they were on Zoom.”

Colson said one trick she figured out after a few sessions was to have all the students unmute themselves for the entire class. Some were worried that background sounds from their home life would be disruptive, but Colson felt differently.

“I wanted us to hear each other’s spaces,” said Colson. “It kept us from feeling like we were speaking into a void.” It also removed a barrier for class discussions; students didn’t need to remember to hit a button to talk.

“Successful conversations about literature happen when everyone brings who they are into the discussion. If you’ve been able to have honest conversations in class, then doing this online can still feel natural,” said Colson. She said workshopping their writing over Zoom also went well.

Every spring, in her Man and the Natural World class, Colson does a photography unit based around Teju Cole’s book Blind Spot. This spring, visual arts teacher Scott Nobles gave a guest presentation over Zoom. Then students took photos in their home environments, a narrower focus than in the past, but Colson was very happy with the results.

“These photos were so authentically who they were, so in some ways it made this project even better,” said Colson. Students shared their work with each other over Zoom and Colson said they had great discussions.

Another Colson spring tradition is offering an optional film unit for any of her seniors after their classes have ended and they are on senior projects. Usually, they watch the films together in her classroom and then have discussions. She decided to still offer it, and was surprised to have a group of seniors from three different classes sign up. On their own, the student watched movies such as Citizen Kane, Lawrence of Arabia and The Godfather and then discussed the films together. Colson said it was fun to hear what they had to say and a great way to wrap up the year.