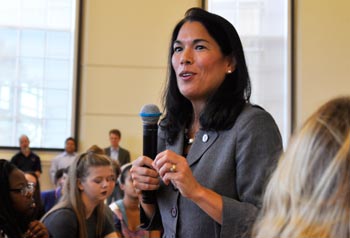 Recognizing and respecting one another’s differences—rather than using them as ammunition in debate—is the key to civil discourse, Massachusetts State Representative Keiko Orrall told students on Wednesday. Rep. Orrall spoke at the invitation of Milton’s Conservative Club, and she acknowledged that the tact she describes is notably absent from national politics today.

Rep. Orrall, the Republican national committeewoman from Massachusetts, cautioned students against assuming that people with opposing political views are “the enemy,” saying such polarizing attitudes prohibit compromise and grind the legislative process to a halt. “We need to have more productive discourse,” she said. “There is a lot of anger on both sides of the aisle. We need to value and respect other people’s opinions. That’s how we get things done.”

Republicans comprise about 20 percent of Massachusetts lawmakers, and their minority status requires them to reach out often to Democrat colleagues, Rep. Orrall told students. “We have to work hard to ensure a balanced and fair discussion of different policy matters.”

Because the two leading candidates for president, Donald Trump and Hillary Clinton, have run divisive campaigns, Rep. Orrall said she does not believe that a national return to centrist politics will occur during this election cycle. Several students challenged the Republican National Committee’s support of Trump, citing examples of his targeted and controversial statements. Rep. Orrall responded by saying that she did not support Trump during his primary run; however, as a member of the RNC, she is supporting the party’s candidate, as well as RNC efforts to encourage him to tone down his bombastic style. “I don’t agree with many of the things he has said,” Rep. Orrall explained, “but I do recognize that he has a lot of people supporting him who want to see a challenge to the status quo. I am encouraging our candidate to be respectful.”